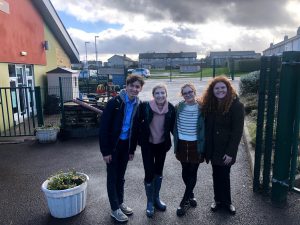 As I prepared to teach I was not prepared to be taught so much. Almost all of my preparation for traveling to Scotland, outside of packing, was preparing to teach to primary students. It didn’t occur to me that I would be learning so much myself. I did expect that I would learn something of course, but the central idea that I had about Scotland was that it couldn’t be that much different from the U.S.. I wanted to learn from my own experience of teaching, but I was not expecting to be surprised by how much could be learned. I guess no one ever expects to be surprised.

There are a few distinct things that I learned from the primary school in Scotland. One, public education can be done differently than it is done in the U.S. Two, the way that public education is done outside of the U.S. is not strictly better, but it is different. Three, difference is something to be learned from. The last point was the most meaningful point of anything that I learned from traveling abroad. There were a lot of things that are done differently in the U.K. It is easy to simply be impressed by how culture, or schools, or government may be different in another country. It’s also easy to be simply confused, angry, inspired, or overwhelmed by the difference. That difference became much more relevant as I began to learn from it. I learned the importance of community by seeing how all members of the primary school interacted with each other. The school was much smaller than most elementary schools in the U.S., and I saw how students of all levels interacted and knew each other well. Throughout the week I started to realize that the school was intentionally creating a community of students and teachers who could interact and learn from each other. This is just a small difference that resulted in an epiphany.