If I had pick my major two passions in life, it would have to be agriculture and the education of others- which is why I chose to be an agricultural education major. Education and agriculture are the two words that drew me to this particular study abroad program. So you could only imagine my excitement when I found out that we would get to tour one of Scotland’s agricultural colleges. As Monday afternoon rolled around I was beyond excited as we pulled up to the Barony College Campus. The first thing I saw was a shelter filled with lambs which is something I had rarely seen before since I do not have a big background with livestock. As the tour began, we started out talking about the agriculture in Scotland and how cereals and grass where their main crops. Then we shifted into what they do on the Barony Campus. After hearing about the campus, it was very interesting to find that Barony is very similar to UGA Tifton and Abraham Baldwin Agricultural College. It was a small campus with barns of animals, agriculture mechanic shops, and classrooms. After hearing about the college, we got to learn about the dairy that they run on their campus. It was interesting to find how similar their dairy works compared to our dairies at UGA. After getting to see the cows and calves we made our way to see the lambs. After having the best experience ever of petting the baby lambs, we made our way through the school. The school had an ag mechanics shop where we got to see students working and then were got to see their technology room. The school likes to improve on their students technology skills so this specific classroom focuses on improving those IT skills. After the tour was over, it was just overwhelming at how much I learned and how much fun I had along the way. Barony College is very similar to agriculture colleges in the United States and was easily one of my favorite part of our program. 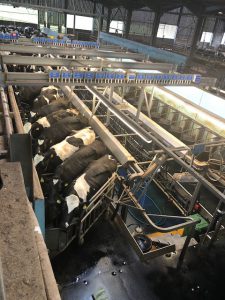