What is flying like? What should I pack? Should I pack two jackets or five? Where is my passport? Should I wear my UGA shirt to the airport? These are all questions I asked myself at least once before heading to the airport to leave for London. Before this trip, I had not left the eastern United States. Before my trip to Scotland, I had never been on an airplane and I had never actually been to the airport. I did not know what to wear or what turbulence was like and I definitely had no idea what airplane food was like. Needless to say, I was so scared and nervous to get on a airplane and do not get me started on how nervous I was to actually get to Scotland. The nerves I had about the trip were overshadowed by the excitement I had for the opportunity to get to travel and learn about education and agriculture in another country. As the plane took off, I held the hand of my best friend next to me and all I could think about was the adventure I was about to have. I slept for most of the flight but when I woke up I was in Heathrow, London. I was in another country. I was suddenly so excited to get off the plane and see the weather. I was curious to see what their towns looked like. I wanted to hear their accents. I wanted to taste their food. I wanted to learn about their schools and agriculture. I could not wait to compare London and Scotland to the United States. I knew that for the next eight days I was going to learn so much and meet so many new people. I knew I would have so many new experiences and that I would never get an opportunity like this again. I was about to take advantage of this once in a life time experience because I will never be a first time traveler again. 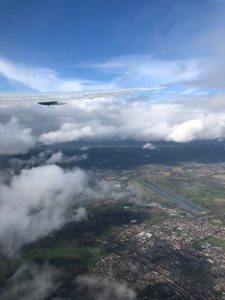