The top item on my list of things to see in Scotland was a Scottish Highlander, since they are one of my favorite cows. Marlyn and I were able to see a few from the window on the train ride to Scotland, and I was super excited about that- probably too excited. We were able to visit SRUC, one of Scotland’s rural colleges, since we weren’t able to visit the primary school on the first day. This was a great experience. We were able to see agriculture from their perspective and speak with some of their professors. I noticed that their dairy farms are very similar to ours. They have a LOT of sheep. One of the professors took us to see some of the lambs with their mothers, and of course I felt like I was in heaven. They were all so cute. One of us talked with the other professor about the agriculture programs in their schools, and we were shocked to find out they don’t have them. They have the agriculture college, but that’s all. While we were in the schools teaching our lessons, we learned they have a lot of environmental education. They are an “eco school” which focuses on recycling, reducing litter, and overall bettering the environment. This is required for schools in Scotland, and it’s recommended for all schools throughout the United Kingdom. I guess it’s different since it’s so common in Georgia and we grow up around it our entire lives. I also learned that their tractors are geared differently than ours here are. I realized this once one passed us going about sixty miles per hour. The farmers in Scotland don’t live out on their farms, so they have to drive to them. I really enjoyed being able to see Scotland agriculture. 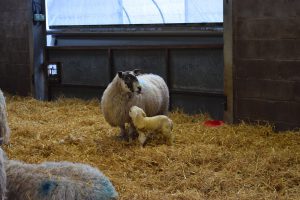