A Day in London

We landed in London around 7:00 a.m. We got to see the sunrise as we got off the plane and onto a bus that took us into the airport. We took the underground to the hotel to freshen up after being on the plane for eight hours. After we took our stuff to our rooms and got ready, we set out to explore. The city was beautiful- nothing like I imagined. The parks were my favorite. They were full of two of my favorite flowers- daffodils and cherry blossoms. We were able to see the train station where Harry Potter was filmed, Buckingham Palace, Westminister Abbey, Big Ben (even though it was under construction), and the London Bridge. Although it was different from what I was used to, I was expecting everything to be the exact opposite. Most things were pretty similar to what we experience here in the United States. Besides driving on the opposite side of the road, of course. They even played country music such as Carrie Underwood and Darius Rucker over breakfast at the hotel, which I thought was crazy. They don’t eat a lot of the same breakfast foods we eat. They do have some of the items that we would eat, but they also had baked beans on their breakfast buffet. I mean, would you ever consider baked beans for breakfast? After we ate breakfast, we headed to the train station to depart for Scotland. Our train was delayed, so we spent a couple of hours catching up on sleep and Netflix while we waited in the train station. Since we weren’t on the original train we were supposed to be on, we didn’t have assigned seats. I was able to sit next to some people who were actually local, and it was pretty cool to be able to talk to them about their country. Even though us Tifton campus girls were in a whole other world (or country actually), we had such a great time! I absolutely loved London. I wish we would’ve been able to spend more of the trip there. 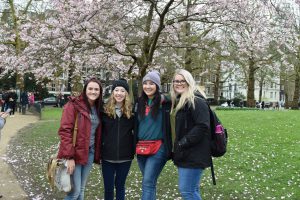