Well, when people told me it was easy to travel around Europe once you’re there, I had no idea how easy it actually would be! Just a couple of weeks into my exchange, a few of my friends said that they were thinking of taking a weekend trip to Berlin, so I decided to join them! We were able to book very cheap flights, and were able to miss class on Thursday and Friday to enjoy a long weekend in Germany. We found a really cool Airbnb on the east side of the city, which was walking distance from the East Side Gallery, the famous art exhibition on the remnants of the Berlin Wall. One of the photos attached to this post was taken there. My friends and I were also able to take part in a free walking tour of the city, which visited and explained many of the historical and cultural sites in downtown Berlin. Also, Berlin was the front lines of the Cold War, and therefore has an impressive history of global espionage. I wanted to visit the spy museum in Berlin, and luckily my friends were nice enough to indulge me!

Along with the vast history in Berlin, the city is known for being one of the largest clubbing scenes in Europe. In fact, just a block away from our Airbnb was a club that was open 365 days a year! My favorite experience while in Berlin was when our group went to an Ice Bar before hitting the clubs. We were able to get a really good deal, and took advantage of it. Everything from the floor to the glasses is made of ice, and they even gave us cool parkas and gloves to wear inside! I had never experienced something like it, and it was a blast! The other photo attached to this post is my friend Ben and I posing with the Berlin Bear at the ice bar.

I am so blessed to have been able to travel to such a fascinating city like Berlin. I also am so grateful for the friends I went on that trip with. We were all from different universities and different backgrounds, but our excitement for travel and new experiences made it a wonderful group to spend so much time with! 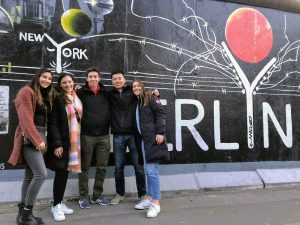 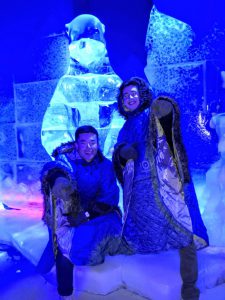