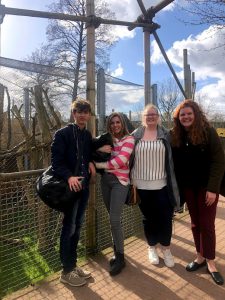 On the last full day in the U.K. we were able to visit London. As a consequence of being our last day studying abroad and the last day of spring break, it was hard not to be a little bit sad. As another consequence of it being the last day, I was pretty tired. My memory of that day is filled with happiness, but I can also remember being a little bit down at the reality that we would’t be spending more time in the United Kingdom. This picture shows me and my peers at the zoo in London. It was actually quite a trip to get to the zoo from were we arrived in London. Altogether it took about 45 minutes to get to the zoo from the train station, but I remember not really being bothered by the trip at all. I enjoyed being able to have time to ride through London. My favorite part about London, as weird as it sounds, was the tube. The underground train was so legitimately fun. I think it made me feel like I was a Londoner on their way to work. There was no other time that I didn’t feel like just a tourist, except when I was on the subway. At the same time, it was silly to me. The decoration of the underground and the people all in a rush. It actually felt sort of not real. It reminded me of an episode of Doctor Who. Anyway, I relished that time that I had to feel like a local because I knew that the trip was coming to an end. I enjoyed being able to spend time with classmates without the pressure of an assignment or teaching responsibilities. It was in those moments, the small and insignificant ones, that I was able to grow closer to people that I go to school with.