Wow, talk about ups and downs! I wanted to take some time to reflect upon the first few weeks of my exchange program in Zürich, Switzerland, because so much has happened already! After my first day of arrival and subsequent jet lag (yes, it is very real) I had dinner with the other UGA students studying in Zürich, hosted by a native student who studied abroad at UGA the previous semester. See, I had arrived about 2 weeks later than most other exchange students studying at ETH Zürich. Because of this, a lot of them had already become friends and were making travel plans. So I thought, “Well, I better jump in as early as possible!”. So that’s how I ended up taking a trip to Konstanz, Germany during only my third day in Europe! The photo attached to this post was taken there. I ended up making some amazing friends on that short trip, and I have to give one of the biggest pieces of advice for early in an exchange. Do The Most. I hung out with the friends I made on that trip for the rest of my exchange, and stayed in touch with some even after they went back to the US! I could’ve easily stayed at home that weekend, started settling into my new apartment, maybe explore a little around the area, but that would not have been the right choice. If I hadn’t spontaneously joined a group trip to Germany on my first weekend in Europe, I may never have connected with those amazing people!

However, not everything was exciting and fun my first few weeks in Switzerland. There were a lot of “administrative” issues I had to work out during that time. Getting a Swiss bank account was a huge hassle. It was definitely worth it for me, as the transaction fee to use my US debit card was unbearable. However, it did take about 3 weeks to finally set up, and those weeks were very stressful. I suggest getting started on this process ASAP when arriving (unfortunately you can’t set up an account beforehand, the Swiss are a little particular about their banks). In addition to a bank account, I also needed to get a Swiss SIM card, providing me a Swiss phone number and data plan. I have a very limited data plan in the US, and figured I would be able to use WiFi most of the time in Switzerland, just like back home. Well, I quickly realized this was not the case. Struggling to navigate a large city like Zürich when Maps doesn’t load can be a scary thing. I suggest looking into data plans before you arrive, so at least you have a plan.

So there you have it, the ups and downs from recently arriving on an exchange program in Europe. Some things may be difficult at first, but I promise you that it gets easier. And please, please interact with other exchange students as early as possible. Most of them are surprisingly friendly, and you’ll want to find a group you can relate to. It makes getting through the stressful stuff much easier. 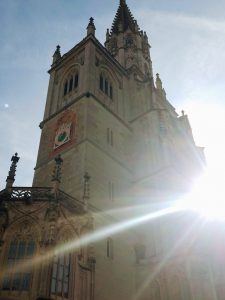 The main cathedral in Konstanz, Germany