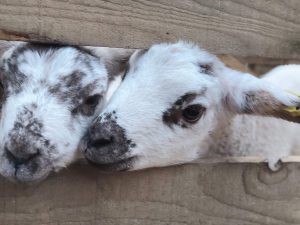 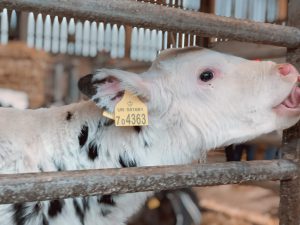 We went to an agricultural university’s farm on our first full day in Dumfries, Scotland. As an Animal Science major, it was really interesting to see how similarly their farms operate compared to ours. It felt like I was back at the UGA farms. If anything, the only major difference was their technology. They had a device that came along the aisles and scraped off and washed away the manure so that the area was always relatively clean. They also had a robotic milker, which we were able to see in action.

Since they have a year-round breeding season, we were able to see both lambs and calves and they were so cute! Of course, the ewes were really protective of their lambs and would stomp and stare at us if we got too close. Then the calves tried to suck on everything they could.

After viewing their farm, we toured their Animal Science Department. They study a wide variety of animals, from dogs and cats to some exotic birds, which I liked a lot. They also had a very interactive classroom setup. They had one huge screen at the front of the room, then a bunch of computer monitors at each table. Each table had a couple of chairs so everyone was in a group. They talked about how their assignments can be submitted at any time, and the teachers can grade it and send feedback to the students immediately. I thought that this was a very efficient way of learning because everyone can talk with themselves at their table and are able to get good feedback fairly quickly. The teachers are also able to work more at their own pace because they get more scattered submissions rather than all at once. It taught me a lot about different ways we could be operating classes back at UGA.