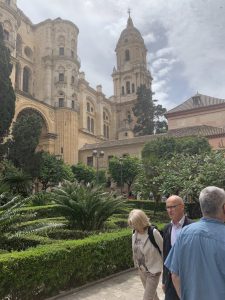 Before my trip to Spain, I had no experience leaving the country on my own. The farthest I had even gone out of the country was to Mexico a few years ago. I did not know anybody that was going to be on this trip, nor had any experience in Europe. Therefore, to say I was not nervous would be an understatement. It made me discouraged to even want to go on the trip, but I am so glad I never decided to back out. Traveling with a bunch of people you do not know to an area where you know very little about and do not speak the native language completely puts you out of your comfort zone. However, that is not necessarily a bad thing. I believe this is what made my experience in Spain so great. I met so many new people I would probably have never known if I did not go on this trip. My roommates were so sweet, and I developed a connection with all of them in the end. It also allowed me to develop a deeper appreciation for traveling and Spanish culture. I learned so many new things that extended outside the material for my major that I was expecting, particularly about history and how it affects many of the citizens in Spain today. Living with a Spanish host family taught me a lot about the people in Spain, allowing me to get that authentic Spanish experience. It even allowed me to learn a little bit of Spanish, when beforehand I would not even be able to form a sentence in Spanish. Sure the language barrier made things harder, but it just showed the different ways you could communicate with someone. Overall, traveling alone is very scary but sticking with it was probably one of the best choices I could have ever made.