The Importance of Representation

Throughout my trip through Europe for three weeks, I struggled with relating to and staying interested in the art. I never saw any African culture or any black faces in any of the art. Don’t get me wrong, the paintings were marvelous and beautiful, but I still desired that representation. I just wanted to see images that looked like me.

I noticed that Egyptian and mainly other African art was found in the farthest corner away from the center in several museums. For example, in Le Louvre in Paris, France, it took several minutes to get to the end of the far-left wing of the building to see the African art exhibit. Also, in The British Museum in London, England, the African art was downstairs, of course. However, I was completely mesmerized by the museum’s selection of African art because I was actually able to see black art, specifically my Nigerian culture, on display. I spent most of my time down in the basement reading each and every descriptor about the masquerades, face masks, wooden structures dedicated to fertility, various cloths, and the importance of brass in art. Finally, I felt represented and, rightfully so, since Nigeria was once a colony of Britain.

Representation is necessary because it can promote one to be proud of their identity and also encourage them. I craved to see my history portrayed in the museums which claimed they displayed the world’s art. I longed to feel as inspired as my professor looking at Roman gods, but I was empty … until The British Museum. I’m grateful for the art in The British Museum because it showcases me. This is why whenever I would see art with a black person in it– even if it was just one– I would immediately take a picture of it and with it as well. I know that there is more to black history than slavery; I know we existed before America. I know that Africans that were nobles and musicians existed in pre-20th century Europe, so, in the words of Mo’Nique, “I would like to see it.” 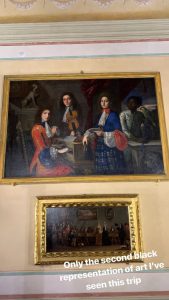 African art in the British Museum