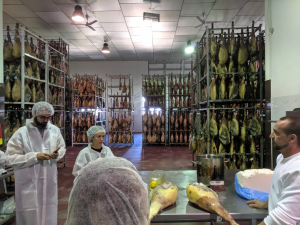 Like a large portion of the students on the trip, this introduction to Spanish ham production was my first time seeing a commercial meat processing facility. As Spain is one of the leading producers of pork in the world, the pork facilities we observed unsurprisingly were capable of handling very large quantities of meat, with the second location holding approximately 25,000 hams according to the guide. The pork industry has major economic implications for the country, providing jobs for people like the ones we saw working the meat counter or making sausages. During our visit to the larger ham production facility, we observed hams in different stages of processing. Many of the hams like the ones pictured were in the midst of their sometimes two-year-long dry curing process. The pork industry is as much economical as it is cultural for the Spaniards. The Spanish are passionate about their ham and maintain high standards for the quality of the meat.