It is hard to sum up an experience like our spring break trip to Uruguay. I was so nervous at first to be traveling abroad for the first time, especially to a country as small as Uruguay. However, after the first day or two, I found my nerves quickly fading. The Uruguayan people that we met throughout the trip were so friendly and welcoming, and we could tell that they were genuinely excited to have the opportunity to show us around their home country. Many of the agriculturalists that we met throughout the week had been educated at American colleges or had at least traveled to the U.S. Because of this, it was much easier to chat with them and draw comparisons between our agriculture industry and theirs.

Having been a picky eater all my life, I was also worried that I would starve in a foreign country. However, my only complaint about the food in Uruguay was that it was far too delicious. The Uruguayan diet essentially consists of beef, potatoes, bread, and cheese (No greens? No problem!). They also eat dessert with just about every meal. I think it’s safe to say that every member of our group gained at least a few pounds by the time the week was over.  It has been a few weeks since we returned from Uruguay, but I still occasionally find myself dreaming of Uruguayan steaks and dulce de leche (their go-to dessert).

If I was asked to name my favorite part of our trip to Uruguay, it wouldn’t be any single food or experience but rather a single individual. Our trip to Uruguay would have never been possible without Mr. Bruno Lanfranco — our fearless leader, translator, tour guide, teacher, and friend. From the very moment we arrived at the airport in Montevideo, Bruno made us feel safe and welcome. He even took the time to learn all of our names and faces before we arrived so that he could greet each one of us individually. As the week went on, each and every one of us had the privilege of getting to know and love Bruno. By the time the second Saturday rolled around and it was time to return home, we all felt as if we were leaving behind a long-time friend. I am so thankful to Bruno for all he did to make our study abroad experience fun and fulfilling and hope that I may one day have the chance to visit him and the beautiful country of Uruguay again. 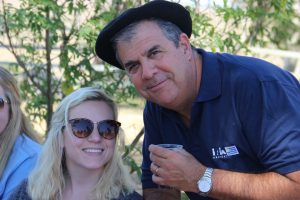 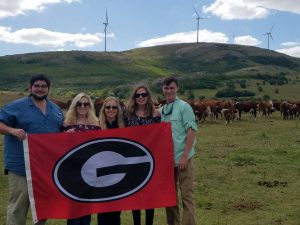