The UGCA began in 1936 when Horace O. Lund arranged for the construction of two 40-drawer Minnesota-style specimen cases to house an insect collection at the University of Georgia. Dr. Lund, the “Father of Entomology in Georgia,” later became the first head of the Department of Entomology at UGA when it was formed in the early 1950s. By the time that Dr. Lund retired, the insect collection had a total of 13 large wooden specimen cases.

In 1965, much of the historically significant insect collection built by Perry Wilbur Fattig was transferred to the University of Georgia, forming the core of a research collection here. Professor Fattig served as the curator of the Emory University Museum from 1926 to 1953, during which time, he worked to collect and document the insect fauna of Georgia.

Kenneth Knight served as the first curator of the UGA insect collection. During his brief (1966-1968) curatorship, Dr. Knight transferred and stabilized much of the newly acquired Fattig material which had been stored in cigar boxes and had been damaged by dermestid attacks and a fire. Approximately 100,000 specimens were salvaged. By the end of Dr. Knight’s curatorship, the UGA collection occupied eleven wooden cases and 880 drawers with about 125,000 specimens. At this time the collection was referred to as the “P.W. Fattig Entomology Museum” since 80% of the holdings represented Fattig material.

In 1968, Warren Thomas Atyeo became the second curator of the collection. During the thirty years of his curatorship, the collection grew to approximately 650,000 insect specimens and expanded in taxonomic scope. With support from two NSF collections grants, Dr. Atyeo succeeded in obtaining the first metal insect cases for the insect collection. In addition, the collection expanded in taxonomic scope. As an acarologist, Dr. Atyeo oversaw the rapid addition of mites and other non-insect arthropods to the holdings. By the early 1990s the UGA acarology collection included some 109,000 slide-mounted specimens and 30,000 vials of additional mite specimens. Most of this material represented ectoparasites of birds, reflecting Dr. Atyeo’s research interests. In 1998, Tom arranged for the transfer of the bird ectoparasites from the UGA acarology collection to the University of Michigan where there was a large acarology collection and training program.

Cecil Leo Smith began working with Dr. Atyeo in 1973 as a student curatorial assistant. In 1981, he was hired as the Collections Manager. His title was later expanded to Collections Manager and Associate Curator. Dr. Smith’s research focuses on the taxonomy of semiaquatic Heteroptera, especially Veliidae. Cecil generated a great deal of material from his local field work and from several field trips to Central America and Taiwan. He retired in 2011 after 38 years of service, but remains active in the UGCA.

In 1985 the insect collection was moved from the Biological Sciences Building, home of the Department of Entomology, to the nascent University of Georgia Museum of Natural History. At the time an effort was underway to consolidate the various departmental collections on campus into a centralized museum. Seven years later, the acarology collection moved into the museum building as well.

Joseph V. McHugh became the third curator in 1996, and continues to serve in that role currently. Dr. McHugh’s research focuses on cucujiform Coleoptera. When Joe was hired, the holdings of the collection were estimated at 650,000 insects and 5-6 million mite specimens. To better reflect this diversity, the name of collection was changed to the “UGA Collection of Arthropods” (UGCA). In 1999 the entire museum was given official state designation and renamed the “Georgia Museum of Natural History.”

D.A. Crossley, Jr., began serving as the Emeritus Curator of Acari in 2004. “Dac” had directed several graduate students in studies of soil mites (Acari) and has added to an already impressive collection based on the work of Warren T. Atyeo and Preston E. Hunter. Dac’s taxonomic skills include the chigger mites; he is the surviving US expert in that field.

E. Richard Hoebeke was hired as the Collections Manager and Associate Curator following the retirement of Cecil Smith in 2011. Rick’s areas of taxonomic expertise include Coleoptera (especially Staphylinidae and Curculionidae: Scolytinae) and Heteroptera. He also is a recognized authority on the detection and identification of invasive insect species in North America.

In 2012 the Georgia Museum of Natural History provided some much needed additional space for the UGCA, allowing all of the holdings to be housed in one location for the first time in decades. At the time, the holdings of the pinned collection were estimated to include 1.8 million specimens. 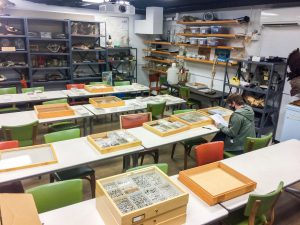