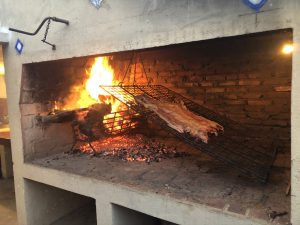 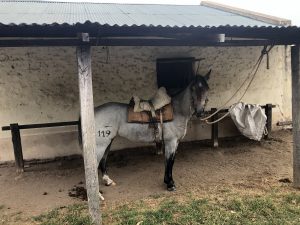 Spending the Afternoon at the Paraiso ranch was the highlight of my trip. We arrived at the 10,000-acre cattle ranch on Wednesday afternoon. We started the tour by listening to Mr. Jose tell about his operation and talk about the numbers. The Paraiso ranch consists of 6,624 acres of natural fields, 1740 acres of sowed pastures, 664 acres of rice, 551 acres of summer tillage, 198 acres were the dam is and 209 acres of unproductive land. Julia Ortiz is the owner and Jose is the farm manager. When it comes to goals, the Paraiso ranch has very high expectations. They have a goal to sell 800 cows to slaughter, 13,200 lbs of wool, and 240 sheep to slaughter. They have a goal of 80% birth rate from their cattle. They like to have a good young growth of female calves to put with bulls at 2 years old. Jose also looks for good young growth of male calves to sell them to slaughter. The Ortiz’s also have Criollos horses, which were initially for work and a hobby. Their horses are now another income for the farm. They sell about ten horses annually which brings approximately $9,000. One thing I found interesting was that the 10,000 acres were only valued at 1,000 dollars an acre. Farmland was very cheap in Uruguay compared to the United States. Their assets in total were 11.3 million. The land was valued at 9.6 million, cattle at 1.5 million, horses at 112,000 and sheep at 39,000. The annual sales were only 627,000. The cost of his operation in total was 397,000 annually. Mr. Jose explained to us that the business that he is in is very high investments and very low profitability. They were generous and took us on a farm tour on horseback. After the tour, they had slaughtered a lamb that morning and were cooking it over a fire for dinner. We enjoyed a great meal and were able to Mr. Jose any question that we had about his operation.