It was very interesting to see how, although the farms were within a small country and produced the same products, each farm had different management tactics depending on their necessities. We mostly focused on beef cattle production, but we also learned about rice and dairy production.

In Los Tilos, we learned about masiegas, which is a type of grass that grows extremely tall and is dead in the center. Their pastures are covered in this grass, which was mostly ignored by the cattle. In order to increase cattle acceptability of the grass, the farmers at Los Tilos used a long chain tool that collected and pulled out the dead centers of the grass, while leaving the more nutritious outer ring.This technique allowed more grass to grow in the area that was cleared of the previous dead material. They also take advantage of silvo pastures, which are areas within the pasture that are naturally shaded by trees. I enjoyed learning about them because instead of building an artificial shelter for the animals, they used a more ecological  method.

Another interesting cattle ranch was El Cristal with Mr. Alfredo. Speaking to Alfredo was amazing because although he had so many limitations from SNAP (an environment reservation organization). He figured out ways to produce efficiently while following SNAP regulations. He was unable to change any landscaping within 5 meters from a protected lagoon within his property and is required to maintain the grass no taller than 5 mm to provide migrating birds a place to rest and eat. As a result, he placed the cattle within that area to regulate grass growth and to take advantage of the lagoon’s natural source of water. He is also not allowed to use any scare crows or other forms of protection against birds within his pastures. As a result, he plants 5% more soybeans than he needs in order to have enough product to recieve a profit. Although the limitations were made to protect the birds, it has heavily effected Alfredo’s production efficiency. He is unable to protect his own crops and needs to heavily regulate his cattle’s pasture consumption. Yet, he loves what he does and continues to find creative ways to increase production. 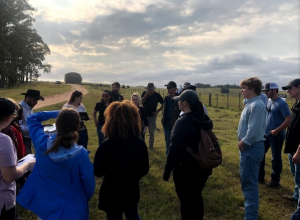