After months of waiting and nervousness, I finally boarded the plane heading to Uruguay! The flight was a red-eye and I honestly thought we would never land, but we made it! The airport was completely different from the ones in the US, the employees were actually nice and helpful. We all exchanged some cash for Uruguayan pesos which were around 33 pesos per US dollars, although nearing the end of the trip it was closer to 40 pesos per dollar. We left the airport after meeting our guide Bruno, and checked into our hotel, The Dazzler, which was probably the nicest hotel we stayed in. After a spot of pizza for lunch we headed to the Motevideo, INIA facility. INIA is the company Bruno works for and it is a agricultural research company that researches different aspects of the local agriculture. In Uruguay the majority of the beef production is grass fed so INIA is researching by adding a small amount of grain to see if it produces an economical gain on the cattle. Uruguay grows soybeans, corn, and things we in the US use as feed for our grain produced beef. Uruguay does not have the means to process feed. So, grain is more expensive to feed; they are trying to gage weather feeding some grain is beneficial and cost effective. After a brief presentation at INIA we headed back to the hotel and had about an hour and a half to clean up or take a quick nap. In Uruguay, the people eat late at night sometimes around 11 p.m. so we had to specifically call in advance to get a table at 8:30 which is really early for them. They served us family style beef and chorizo and unbeknownst to us at the time, at the table right next to us was a Uruguayan senator. This is a pretty common event. We actually ate near a senator again a few days later. There was really no fuss made over who they were; which is something that would never happen in the US. It was neat to see how they treated politicians in comparison to how we treat them. 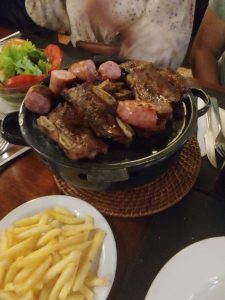