The Moments We Remember Most Are Not Always Planned

During our wonderful time in Spain, we had many planned day trips surrounding our studies of agriculture in Western Europe. Not only did we study the agriculture, but we got to experience Spanish culture and learn about their history. In our time that wasn’t exactly planned, I was also able to learn valuable lessons. One night my host mother decided to take us out for dinner. It was a beautiful evening that I will never forget. The food, wine, and conversations we had will stick with me. For example, I learned my host mother’s opinion on GMO food which coincided with most of Europe’s stance. We compared life-experiences and I learned about her childhood in Granada and how the city has grown. I felt graciously accepted into their lives and culture even as an outsider wanting to get a glimpse in. The afternoon before we left, I had the pleasure of getting coffee with my Spanish friend Ines, as well as her two friends. I also invited some of my friends from UGA. We walked to an outdoor cafe that was cradled up high with a beautiful view of the Albaicín region. We discussed the differences in college and what paying taxes is like and how student loans work. It was interesting to compare schools because college here is very different than Spain. It is enormously cheaper there. Talking to students that were relatively close to our age was refreshing  because of their different experiences and thoughts. Finally, a third experience that was not really planned was when I went to a hostel to hear live music. One of the things I enjoy doing at home is listening to live performances, so I wanted to see what that was like in Spain. We met other travelers there and got to hear a musician play. I was surprised that many of the songs played were in English, and songs that we would commonly hear played out in Athens.

I’m grateful for having these small moments that made me feel like I was learning without intending to. I learned being open and seeking out opportunities to learn outside of the scheduled ones were extremely valuable. The impromptu ultimately added to my experience in Spain overall and truly gave me the ability to jump into situations that will stick with me. 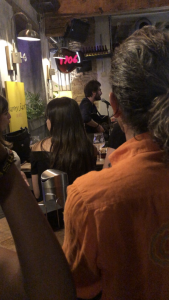 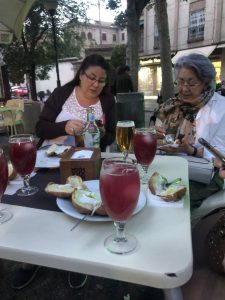 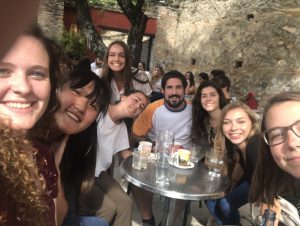