After being home from Spain for a month or so now, I am able to look back on the trip and see how it impacted my life and my hunt to become a future agricultural communicator. With the trip being centered around food production and culture, we discussed topics that will most likely be very common and prevalent in my future field. In one portion of the trip, we discussed ham production in the country of Spain. While most consumers of these products may not know the production details of the ham or how it is processed, it is our job as agricultural communicators to be able to open the curtains on the operations and allow the public to see and understand what goes into the production of their food. That gives us a way to debunk a lot of the false rumors that can often surround the industry in terms of production and care. I may not go into communication involving ham production specifically, but if I ended up doing public relations for a poultry production company, I would be able to explain to the public in various ways the absence of hormones used in chicken production among other misconceptions. We also went to an olive farm where some of the workers were able to show us how they grew their olives and then went through the production process. While they did a fantastic job of showing and explaining to us how their operation worked, as a communicator in the same field hopefully, I could eventually expand on some of the ways they were able to show us what they did using different media platforms they did not use. This trip did a great job of allowing me to see some production ways from another country and how to implement what they did in my own career aspirations. 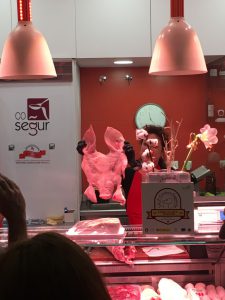