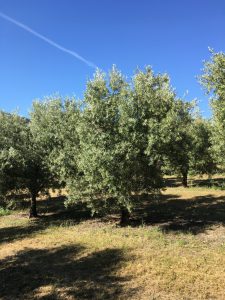 Spain was a major culture shock from the first time I set foot on the foreign soil. One of the first things that I noticed when we arrived to Spain was the insane amount of olive trees that covered the landscape from the airport to Granada. It went on for miles and miles and miles, and I had trouble comprehending how they were able to harvest the fruit. Lots of the trees were on terrain that looked may be difficult for a tractor or machine to get on to be able to, so that was tough for me to comprehend at first. I was glad when we were finally able to visit the olive tree farm and learn about how they were grown and harvested. It was honestly my favorite part of the trip. There were several harvest methods that have been used an perfected from over the years, starting with beating the tree with several sticks and knocking the fruit onto the ground. Eventually tarps were used to soften the blow and catch the fruit. The trees have also been modified up to this point to be the most productive they can be. Nowadays, the most modern harvest method involves a tractor that wraps around the tree, spreads a tarp around the tree itself, and shakes it until the olives fall. It cannot do too many trees at one time as it could damage the fruits and begin the fermentation process too early. In terms of processing, the olives went through several separation methods from de-stemming to fermentation to storing the actual olive oil itself. There was some leftover substance that the company could not dispose of but could not use, so they were able to give it for free to a company who turned it into energy. This entire process turned me into an olive guy.