I spent this weekend traveling independently in Meknes. I read up on the city and most of the information I found discussed how it was tourist friendly and a great place for solo travelers! I found this information to be true! I woke up early Saturday morning to catch the train to the city. When I got on the train I ended up having an entire compartment to myself for over half the trip… which was super nice. I got to Meknes around 10:30. I had read my map wrong and realized the Airbnb I booked was actually a 30-minute walk instead of 10; so I started my walk. I didn’t catcalled or harassed the whole time I was walking. Everyone was very friendly throughout my trek and were willing to help me find where I was going. A European woman and I ran into one another at one point and she helped me find my riad (I was a little lost). I got checked in and was escorted to my room: I really didn’t want to leave. I definitely splurged for my last weekend ($25) and absolutely loved the riad I had booked! I actually had air conditioning, which might have been my favorite part. I almost just wanted to spend the day in my room, but I finally made myself head out to the medina.

I headed to Al Hadim square which is popular medina for tourist items. There were hundreds of people and I didn’t end up staying long because it was a little too overwhelming; too many people and lots of yelling. I turned at some point and ended up in the spice and meat market. I really love walking through the meat markets because you can tell all of their animal protein is so fresh; definitely something I wish was more popular in the states. While I was walking through, a man bumped into me and then quickly apologized. I said “it’s okay,” and that’s when I knew I had made a mistake. When he realized I spoke English he wanted to ask me a million questions. “Are you American?” “What state are you from?” “Why are you here?” While he wasn’t aggressive or creepy, I had just really wanted a solo weekend and to experience a city like this on my own. At this point, though, I had already said too much and knew it would be hard to get out of the situation. He ended up showing me a good spice shop, buying me coffee, and taking me to a Damascus silver shop (an art that is done one place in the world: Meknes). He actually took me to some places I wouldn’t have been able to find on my own and for the most part I appreciated his guidance.

I went to dinner on my own and headed back to my Airbnb a little early to blog and reflect on my day. Something I realized is how much I miss alone time. While having company and being in a place that is so warm cultured is nice, I miss sitting in a quiet room by myself or walking around in the grocery store and not having anyone talk to me. I enjoy solitude. Americans are notorious for being “cold” and perhaps rude, but I don’t necessarily think that’s true. We just keep to ourselves. I feel like there’s this spectrum of cold to warm cultures and Morocco and America are on complete opposite ends. It would be nice if there were some middle ground. In America, you don’t speak to strangers and mind your business. In Morocco, strangers don’t exist and personal space is an unknown concept. It’s too very harsh realities that I have struggled adjusting to. I am looking forward to being back in a place where my personal space is acknowledged, but I am sure at some point I will miss all of the “good mornings” and “hellos” on my way to nowhere! 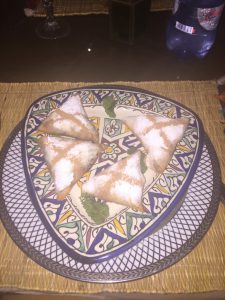 Pastilla: a common Moroccan dish. The pastries are filled with chicken and veggies, then topped with powdered sugar and cinnamon.