Let me begin by saying, the University of Georgia Spain Maymester was the best decision I have ever made. We saw beautiful architecture, ate amazing fruit and food, experienced the amazing Spanish culture, etc. Here is just a little bit of Spain that we were able to experience on this trip: 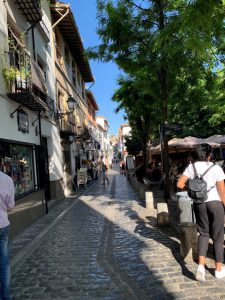 This Maymester was based out of Granada, Spain. It is a larger city in Southern Spain that keeps its history preserved. This picture is just a picture of one of the streets as we were taking a city tour. The city looked as though it had been taken out of a storybook and placed here. It was absolutely beautiful. Most of the people living in the city lived in apartments and almost every balcony contained colorful flowers. 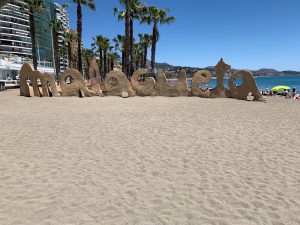 We spent our weekend in Malaga. This city felt a little more touristy than Granada, but still had the beautiful aspects. We were able to go to the beach and have free time. The beaches in Spain are not like the beaches in America. The sand is more like rocks and the water is clear blue. 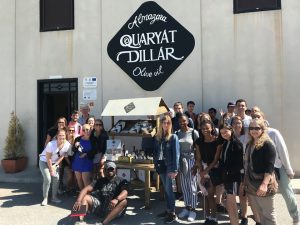 We visited an Olive farm and production center. Quaryat Dillar farms all of their olives and takes it straight to processing after the olives are harvested. It is a family farm and has trouble competing with the larger corporations, but it has a higher quality olive oil and keeps the olive oil at an affordable price. 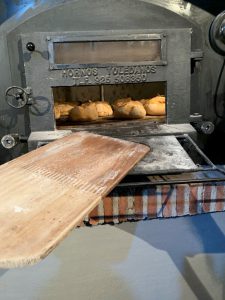 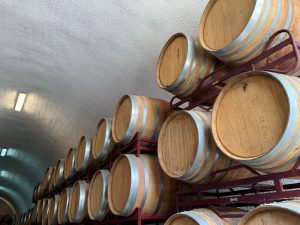 Wine is an important part of Spanish and European culture. They do not see wine as just alcohol, but they see it as a part of their everyday meals. They drink wine for lunch and dinner almost like Americans drink carbonated beverages. On our last day in Spain, we visited a winery. The picture above shows the barrels that red wine is kept and stored inside caves to age for 6 months to a year. 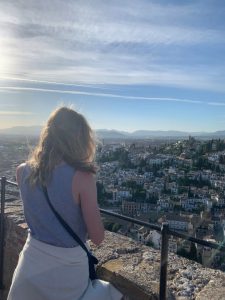 One of my favorite experiences was taking a tour of the Alhambra in Granada, Spain. This was a castle that had elaborate gardens, multiple different towers, churches, mosques, and different buildings that different kings built. It was a castle that was started by the Moorish people. The Catholics then took over the city and added on to the property. We were able to see where Christopher Columbus received the last amount of money from Queen Isabel and King Ferdinand to sail to the Americas. The picture above shows the view of the very top of the watchtower at the Alhambra.