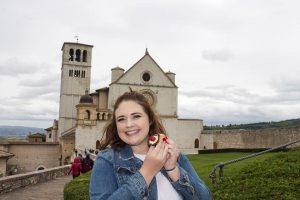 Before coming to Italy, I didn’t really know what to expect when it comes food. I have always loved pasta and pizza but knew that traditional Italian food would definitely not be the same as the American Italian cuisine that I was used to. Of course the first thing that I bought food wise when getting to Italy was a gatorade and pizza. It wasn’t the Italian pizza that quickly stole my heart. It was just fast airport pizza. Throughout the month after I decided to try to never eat the same dinner twice. I fell victim to cheating and ordering sausage pizza a few times more than once. I also fell victim to the McDonald’s trap a few times as well. Although occasionally I just wanted the same sausage pizza, every time I tried a new meal I was more impressed than I thought I would be with the exception of seafood. When I ordered fried shrimp I didn’t quite expect a whole shrimp with the shell and eyes completely battered and fried. My point of this post is don’t be afraid to try new things, especially at restaurants. Although some of the menus might not make any sense and words don’t seem appealing, the food behind it is great. I enjoyed being able to say that I ate traditional Italian cuisine while in Italy. On top of every meal being absolutely incredible, the dessert was out of this world. One thing that I found interesting was that although there are traditional Italian dishes there are also dishes and desserts that are traditional from the cities that they originate. As this picture shows the cannoli’s that I ate in Assisi were very different from those that I ate in Venice. Also, southern and coastal parts of Italy have a more traditional Mediterranean diet. Although there are plenty of dishes that you have never heard of that you should try, makes sure that you also eat a pizza and calzone once or maybe four times.