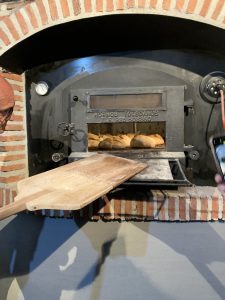 During the trip to Spain we took a trip to Alcudia de Guadix where we made bread and cheese in cave houses. The first cave we went into we were able to make cheese from goat milk. We added renin extracted from a plant in order to separate the curds and whey in the milk. We strained the curds to form the cheese and let it sit while we went to make the bread. We made bread in a different cave using flour and added yeast to help the bread rise while cooking. It took a lot of kneading and flour, but eventually, we were all able to get the right shape and slashed the dough with a knife to allow it to expand while baking. We were able to go to another part of the cave to eat a delicious cheese and bread lunch while we waited for everything to finish cooking and setting. We spent about two hours touring the different parts of the cave and learning about all the history associated with the people and their homes in this town. Since there was not much seasoning or aging that went into the cheese, it ended up just tasting like milk in solid form which did not taste the best. However, the whole experience of making the cheese was very fun, and I learned a lot about the more basic processes of cheese making. The bread we made was very hard on the outside, but once it was cut into it was very warm and soft. With a little seasoning and butter or olive oil it would have tasted great. Since people in Spain follow the Mediterranean diet, bread and cheese are very important in the foods that they eat. Learning about the process behind how this food is made gives a deeper insight into the important foods in Spanish culture.