A Love Letter to Greek Food

Before visiting Greece I knew of some Greek dishes.  Falafel, gyros, and Feta cheese to name a few. I knew that I would fall in love with the ancient architecture since I have been a history buff after taking Latin for five years.  I had no idea that I would fall so in love with the Greek food and the culture around their meals. Each region that we visited had their own special flair but they all had tzatziki.  The creamy cucumber dish was the first thing brought out to us at each dinner table. I often ate it with pita or bread, but sometimes I just scooped it up with a fork. I miss that fresh tzatziki.  In our lectures at the American Farm School, we learned about olive oil and importance of olive oil in the economy. We learned that some Italian companies export Greek olive oil, add a tiny amount of Italian olive oil and slap an “Italian Made” logo on it.  It’s not hard to see why the Italians seek out the Greek olive oil by the ton. Each meal we had in Greece also included a beautiful Greek salad of peppers, cucumbers, the juiciest red tomatoes and topped with beautiful Greek olive oil. I absolutely purchased some of this magical elixir to share with my friends and family back home.  Another lecture we had at the American Farm School was on whether or not agritourism can bring tourists to Greece. I think commodities like olives open a unique opportunity to farmers. Small farmers could open their fields and process up to tourists. Offering an olive oil would be a unique gastronomic tourism activity. A final ode to Greek food: gyros, moussaka, grilled sardines, calamari, spanakopita, saganaki, mussels, fried zucchini,  everything eggplant, baklava and souvlaki….I love you. 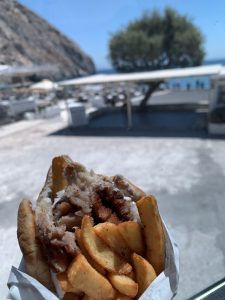 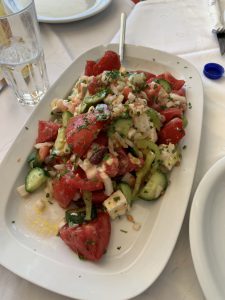 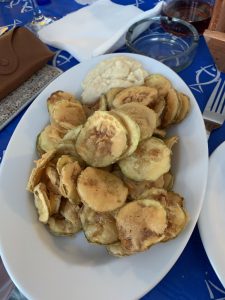