Back in high school, we were required to take a foreign language class. I had the bright idea to take French because I wanted to be different and thought to myself I will never have to use Spanish in my life… Big mistake. High school me never thought I would be studying abroad in Spain, of all places. Because my high school French class did not prepare me for a Speaking country, I was a little concerned going into this study abroad. Before my arrival in Madrid, the only thing I knew how to say in Spanish was ‘where is the bathroom’ and ‘Hey how are you’. I didn’t even know the basics of the language but I was just going to wing it. My first two days in Madrid were manageable…most restaurants had English menus and most people spoke some sort of English. I thought ‘oh yeah I can survive here, no big deal’. Boy was I wrong… Sunday we get on our bus to drive down to Granada to meet our host families that we would be staying with for two weeks. Four and a half hours later we arrived in Granada where we are quickly hauled off the bus and immediately given into the hands of our host moms. Sam, Katie, and I were called over to meet our new mom. We all exchanged Holas and I go to ask her what her name is, in English, thinking I would get a quick response. The lady looks at me and goes “Oh no ingles haha”. I thought to myself, ‘Oh I am screwed’. The entire walk back to the house Nudia, the host mom, and Sam (fluent Spanish speaker) were chatting away in mad Spanish while I had no clue of what was going on. Nudia kept looking back at me while talking, I guess thinking I would just all of a sudden know Spanish and could answer her. The first day was rough and without Sam there to translate I would have been totally lost. With the help of my roommates, I was actually able to somewhat communicate with Nudia which I was very proud of. It was a great experience, and I believe taught me more than any Spanish class would, to be able to live and be submerged into that culture and language. 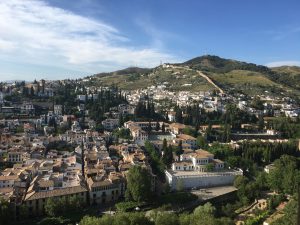