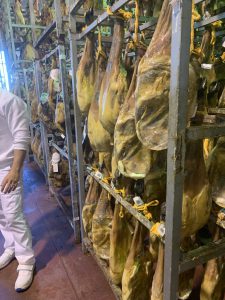 The moment I got to Spain, it was pretty clear that Spanish ham was a staple food in this culture. In nearly every shop and restaurant, you could find jamón being sold for various prices. While on our trip, we visited several jamón and sausage production facilities where we were taught about how ham was produced in Spain. In Spain, Iberian pigs are used for most of their ham and they are sold commercially by the leg. The pigs are “free range,” meaning they live in an open pasture and feed off of acorns to grow to their large size. When the jamón gets to the production facility, it is placed in salt to dry for a period of around two weeks. It is then taken out, rinsed and allowed to dry for a period of four to six weeks. The jamón is then cured and can be left to cure anytime from one to two years. The minimum amount of time they must be allowed to age is 3 months. While it is aging, lard and olive oil are used to preserve it. There are different levels of jamón, depending on the type of Iberian pig and the time they spend on the pasture eating acorns. They are classified by the color of the label on the pig when it is being sold. Black label jamón is the most expensive, and are 100% pure Iberian pigs. Their label is black since pure Iberian pigs have black toes. The red label can be a cross between commercial pigs ad Iberian pigs and does not cost as much as the black labeled jamón. The green label is for pigs that spent less time eating acorns, so are not as large as its more expensive counterparts. Finally, the white labeled jamón does not even need to have Iberian genetics, which makes this the cheapest.