Who was Erasmus of Rotterdam and Why do I Appreciate Him?

Desiderius Erasmus of Rotterdam (28 October 1466 – 12 July 1536) became one of Europe’s most famous and influential scholars for his work as a Catholic priest, social critic, and teacher. A self-called “citizen of the world,” Erasmus rose from meager beginnings to help define the humanist movement in Northern Europe. So, in 1987 when the European Community (EC) was looking to create a scholarship program to assist with the costs of study abroad programs, not surprisingly, they chose to name the program, The Erasmus Program. Previously the scholarship program was available to citizens who lived in the European Union, and many people continue to remember the program in this way, but recently the rules were changed and now American students, and students of other nationalities are eligible for funding for exchange programs in Europe. Gratefully, I now have the opportunity to study abroad in Spain on an Erasmus+ scholarship through a partnership between the University of Georgia and UPNA (Universidad Pública de Navarra) in Pamplona, Spain. I have also taken advantage of my proximity to Rotterdam in The Netherlands to see the Erasmus statute in person, and pay homage to an influential, timeless hero. 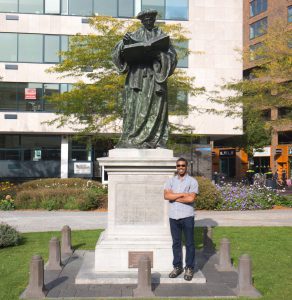