If you’ve never been to or heard of Cinque Terre, read on and be prepared for this tiny slice of heaven. If you have been to Cinque Terre, you already know just how magical of a place it is. 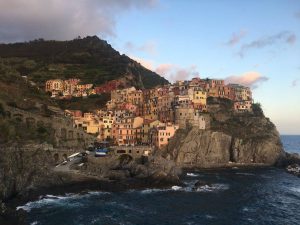 Manarola, where we watched the sunset

I had never heard of Cinque Terre before one night at Lion’s Well, the favorite late-night Cortona bar, when I was sitting outside with a group of students. At the table, there were a couple students from my program, the Viticulture program, and several of the Canadian students we had become good friends with. The Canadians, who were attending school in Cortona through the University of Alberta, were planning a weekend trip to Cinque Terre. Joey, one of the people I became close with during the trip, and I were already talking about going somewhere that weekend, so we said, why not Cinque Terre?

Then and there we decided we were going to book a hostel and meet up with our friends, both American and Canadian, that were taking the four hour train ride to Cinque Terre. However, when we told the Canadians our plan, they told us to forget that idea, and come stay with them in their Air BnB villa. So we said sure, let’s do it! And it was planned.

Saturday morning, May 20th, we took our exams at 7am, booked it to town to pull out euros from the ATM, and met the taxi in the parking lot of Tonino’s, the restaurant where most of our meals took place. The taxi took us to the train station, we got our tickets, and we were off. The four and a half hour train ride went from Camucia, to Florence, to Pisa, and finally to Cinque Terre. Once in Cinque Terre, Joey and I got off in Riomaggiore (the first of the five towns that make up Cinque Terre) with the rest of the Viticulture students who traveled with us. We had no idea where to meet the Canadians, and we had no way to contact them because none of us had cell phone data. However, we really did not mind, because even the view from the train stations were amazing. This place already had my heart, and I hadn’t seen anything but trains. 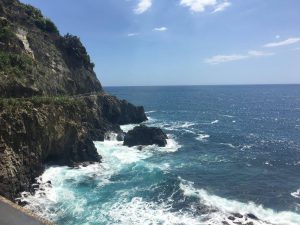 The view from the Riomaggiore train station

Finally, after riding lots of trains in and around Cinque Terre, a group of 12 Canadians met us at the train station in Manarola. We boarded another train, in the direction of Corniglia, where we were planning on having an early dinner before sunset. Of course, in the excitement of finally seeing our hosts and friends, Joey and I had forgotten to buy tickets for this particular ride, and, of course, we got caught and fined. 50 euros. I would suggest that future travelers do not forget buying their 4 euro tickets to ride between cities in Cinque Terre. 🙂

Out of breath, Joey and I power through all the steps up to the town of Corniglia

After hiking somewhere around 600 stairs (two of our Canadian hosts counted about halfway–the rest is just an estimate), we found a little patio restaurant promising Tuscan Italian food and fresh seafood. We were starving, the view looked awesome, and so we pushed together three big tables and enjoyed three hours of good conversation. On top of that, dinner was amazing: penne with prawns and mixed fried seafood including fresh anchovies, calamari, and smelt, as well as the best sangria I’ve ever had. 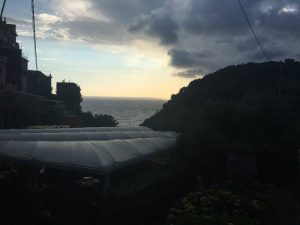 The view from our table at dinner 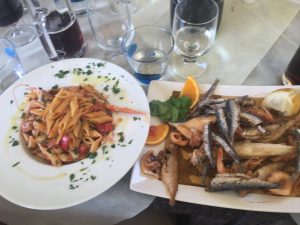 Poor camera quality, but Joey and I’s meal in Corniglia 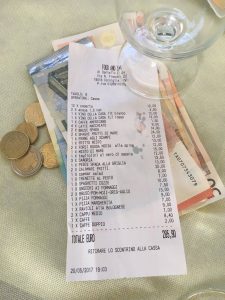 The bill for all 14 of us– we were pretty proud of this!

From there, we made our way, by train, to Manarola to watch the sun set. I have to say, this was truly breathtaking. The sunset seemed to go on for hours, the colors deepening and becoming more intense with each passing second. The colorful buildings built into the hill, the rolling, crashing waves beneath us, the evening wind and Mediterranean air. I sat there by myself for awhile, just taking in this incredible moment with some of the sweetest, most genuine people I’ve ever met. I couldn’t believe how lucky I was. 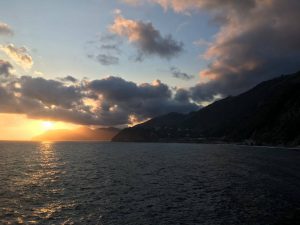 The sunset in Manarola

Once darkness had settled over the little town, we made our way to this villa that we were staying at, which was in Levanto, the town after the last official Cinque Terre town on the train route. Once there, all 14 of us trekked up a winding mountain, through what looked like a beautiful costal jungle in the hills, littered with lightning bugs, all to the soundtrack of familiar summer insects. 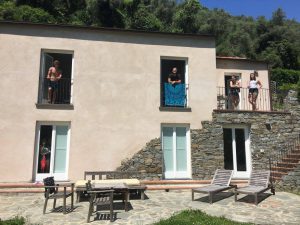 The back of the villa, with several of our hosts chatting with us from each of the windows. This was candid, taken from the pool.

The next day, Sunday, we spent the first half of the day resting and relaxing by the pool. In the afternoon, Joey and I thanked our friends and made the 35 minute walk to the train station from the villa. After the delicious calamari that we had at dinner the previous night, we decided we needed one more meal of fresh seafood, so in Riomaggiore, we found a little store that sold fried calamari in a paper cone. We ate this, plus gelato (my favorite), before boarding our train back to Cortona. At the Florence stop, we somehow managed to end up with less than 1 minute to run from one end of the station to the other before the last train to Cortona left for the night. On top of that, we had no idea which train we needed to be getting on, because it doesn’t say “Cortona,” it says “Rome.” After a lot of stress and running around, we finally ran onto the train to find one of our friends from the program who had also spent the night in Cinque Terre. 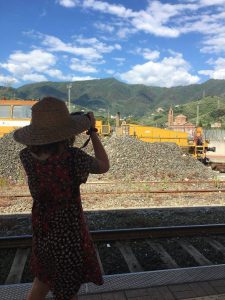 Me taking photos at the Levanto train station on Sunday afternoon

Back in Cortona, all of the Canadians and Viticulture students and Science UGA students got off that same last train, and we all made our way back to our respective dorms, contented, exhausted, and ready for whatever amazing experience Italy offered us next.