During the Trip: The Beginning of the Change

Breakfast was amazing! It started out with fresh fruit and blackberry juice. I, of course, ordered un cafe con leche and tried the tortilla española (see pic) which turned out to be this omelet with spinach, potatoes and tons of onions. Honestly, it was a huge meal. I’m not yet accustomed to eating so much this early. I have missed this! 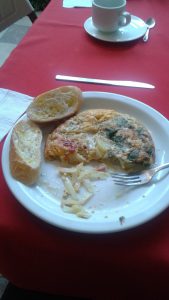 We will be heading to San Luis in about 30 minutes!

So, we arrived to campus, had a delicious lunch consisting of beef, steamed veggies, rice and beans. Ernest, a Dutch tree climber, gave us a presentation about what sustainability is and what people do here on campus in order to create the smallest possible carbon footprint. There is a system called the biodigestor. It is full of Archae bacteria that break down our wastes (feces, etc.) and convert them to methane gas–a huge greenhouse gas. Instead of polluting the atmosphere, the methane is used as a source of heat in order to cook the food in the kitchens. This system runs on kinetic energy and requires absolutely no outside energy source. Ernest described it brilliantly! He reminds me of a girl I met here before. She was vegan and when asked why, she responded, “I just want to live my life while causing the least amount of pain as possible.” Words of wisdom!

Then, we went on our first coffee tour with Hilbert. He grows coffee plants, but apparently it is very hard to do for many many reasons. The largest factor is disease caused by a fungus called la roya (the dust). It is responsible for decimating over 50% of farmers’ plants! Que triste!

Yesterday, we met Ken Lander who was originally an Athenian that now is responsible for supplying all of the coffee to Chick-fi-la. He started Farmers Thrive and pays his people a full $1 more per volume of coffee cherries picked, which is a huge deal!

Today, we visited Oldemar, an organic certified coffee farmer. We learned how much a farmer gets paid per a cajuela (a standardized box that holds on average 7,800 cherries-each cherry holds 2 coffee beans). They earn on average $2-$3! Starbucks charges that much for ONE black cup of coffee which takes about 50 cherries to make (I am being generous with that estimation)! Every single cherry is hand-picked, and only the red ones are supposed to be picked. This is crazy, hard work that takes a very long time, and farmers are earning only $10-$25 a day?? 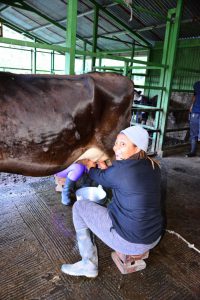 Lelo’s was amazing last night! We learned the salsa, bachata and merengue. I had an even better night with a Canadian tourist I met named Cazz. She was telling me fun facts such as how 60% of the Costa Rican population is middle class, and instead of doing Black Friday, they celebrate noviembre negro (Black November). How cool! 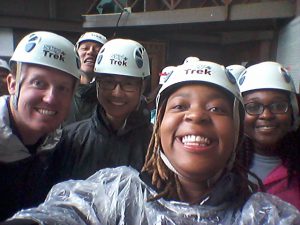 Ziplining was exhilarating!!! Of course, tropical storm Otto brought a lot of rain with it which made the experience bittersweet because at 60mph winds, it felt like my face was being pressure-washed. I’d do it again, though. When we went into town in Santa Elena, I had the best empanada I have ever tasted (and I’ve lived California)!

We are baking pies for Thanksgiving tonight!!! So excited! 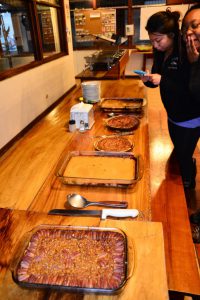 First of all, Happy Thanksgiving! I am so stoked to be spending this American holiday abroad which actually surprises me. I figured I would miss my family more. (Don’t tell them I said that!)

I loved loved loved the lab this morning. It was even more enjoyable than the cupping experience, and I thought nothing could top that. After our blind coffee tasting from the other day, we used the one we liked the best to test out different brewing techniques. I have fallen in love with the Chemex which essentially is a pouring method using a filter in the beautiful glass vase-looking thing (see pic belo). I will never use a Keurig again. The Turkish method may be my favorite because it looked the coolest, but the taste rivaled with that of the Chemex. Difficult decisions! 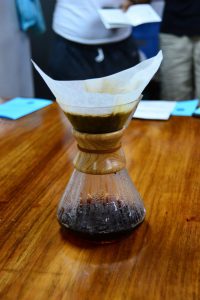 Yesterday, we visited Cafe Britt for a coffee tour, and it was really touristy and superficial! Ugh! I mean  I enjoyed it, and they had a lot to cover in a short amount of time, but it was just too watered down. They never covered the challenges farmers face. They never mentioned how much work and money it takes to become organic certified. I have a low opinion of Fair Trade thanks to Ken’s account about how much farmers earn per cajuela. They mentioned the wage, but never explained how the money was going to the roasters and companies who manipulate the markets to scam hard-working people out of the money they earned. We get charged $3-$5 per cup of coffee and farmers are making less than $10 per day!

I do not mean to come off as such as cynic, but it was almost insulting how little of the full story was given. Everything was made out to be a joke, and when you are talking about people’s livelihoods, it’s just really not funny at all. Most farmers have to supplement their income through tourism which just so happens to be the third largest source of income for the entire country. Overall, the tour was more for entertainment than learning.

On another note, this hotel is stunning (see pic6&7)!!! There is simply not enough time or film to truly capture it. It is so much warmer here than in the mountains, and it hasn’t rained one bit. I am not at all ready to leave this amazing country nor all of the enchanting people I’ve met in it. I am going to enjoy my last night in San Jose. Ciao! 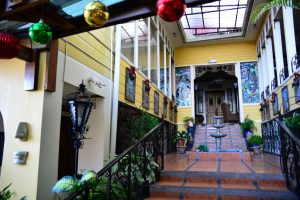 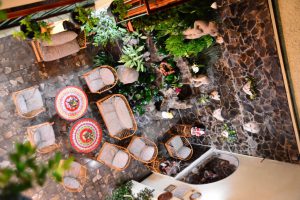