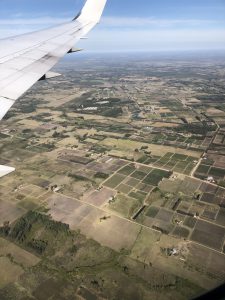 I was very excited about my study abroad trip to Uruguay. However, I was slightly nervous due to the circumstances regarding covid-19. I made it through security and was anxiously waiting at the gate for my flight. Our flight consisted of an hour and a half flight to Miami and a nine-hour flight to Montevideo. This was the first time I had ever traveled to South America and the longest flight I had ever been on. The flight was an overnight flight and I knew I would have to get some sleep on the plane. However, that was not the case. I quickly realized I was not going to be getting much sleep at all. As we started our final descent, I was able to see many rice fields, soybeans, windmill farms, and cattle operations. I noticed that the whole country looked very rural besides the capital city. I later found out that 1.7 million out of 3.3 million people live in the capital city Montevideo. Finally, we landed Saturday morning around 10 am. As the wheels hit the ground I could not believe how small the airport was. The entire airport consisted of four gates and one runway. We deplaned and started our way through customs. The airport was taking covid-19 very seriously even though they thankfully had not had any reported cases. I was very eager to start exploring the country. We started making our way to the pickup where we were supposed to meet Bruno. Burno was waiting on us and knew every one of our names. Burno was just as excited to see us and we were to be there. We loaded the bus and headed to the dazzler hotel where we unpacked. We then walked a few blocks down the road for some of the best pizza I had ever eaten.