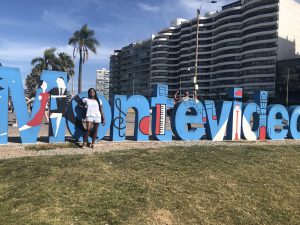 As I stepped off of the plane from a nine hour flight, groggy and uninterested, I looked up to see a message in large letters; “BIENVENIDOS A URUGUAY”. Welcome to Uruguay. My eyes lit up and I began to smile from ear to ear. I had finally made it. I was excited to embark on this new journey and to learn as much as I could during this short trip. We made our way through security to the front of the airport and we met our leader for the week, Bruno. He greeted us with a hug and a kiss and we entered the bus. After getting settled in the hotel, we ventured out for a sight seeing tour of Montevideo, a beautiful city with a rich history. We visited historic monuments, the soccer stadium, and the Montevideo sign. Dinner was at 8:30. Late for me, but at this point I was very hungry and tired. After waiting for a little while in the restaurant, the waitress finally brought out three large platters with different cuts of their signature dish, beef. After a great meal, we finally made our way back to the hotel and got some rest. It felt like I had been awake for two days .

The next morning we got up early to explore more of Montevideo. The first place Bruno took us was the Cerro de Montevideo. On this hill we could see all of the city. The military museum sat on this hill as well. It was called the Fort of General Artigas who is considered the father of Uruguay. After this we visited a statue dedicated to the last four indigenous people of Uruguay, the Charruas. Bruno told us the story of how they fought to defend their land but unfortunately, they were captured for research and died of sadness. Lastly we visited the Uruguayan parliament. For lunch we each had a large steak. This was my first time eating meat cooked medium rare. I was scared to try it but ended up truly enjoying it.