Posted in The Case of the Greek Financial Crisis

Everyone on our trip was so excited to get to Santorini.  I could only hope that it would be as beautiful as the movies and pictures.  It was more that I could have imagined.  The white and blue landscape and beautiful sunsets were definitely a highlight of my trip.

Our first morning in Santorini we visited the archaeological site of the prehistoric city of Akrotiri.  Akrotiri is very well preserved because it was covered in ash by the volcano that created Santorini. Because no bodies or valuables have been found at the site, archaeologists believe that the civilization was evacuated before the eruption of the volcano.  The site is completely covered to preserve it. It also keeps the site cool, which was a plus on this hot Santorini morning! Some spots in the archaeological site are still covered with ash. It was also unique that we were able to walk in the streets of the old city among the preserved buildings.  The site was a great way to learn about the history and creation of Santorini.

Today’s Santorini is a collection of islands.  Two of these are inhabited; Santorini and Therasia.  Before it was called Santonini, it was called Thera.  The collection of islands were formed by the explosion of the volcano.  On our boat trip, we were given the opportunity to hike to the site of the active volcano.  The view from the top of the volcano was amazing. We saw a 360 degree view of Santorini.  Santorini is unique, not only because of the white and blue background, but because of the beautiful caldera.  A caldera is the crater formed by a volcano. Santorini is also home to a red beach and a black beach. The color of these sands were formed by the different types of rock and sediment being heated by the volcano.  At the top of the volcano, you could see steam and smell the sulfur coming out of the rocks. How crazy to think that this beautiful place was created by one of the largest volcanic eruptions in the world. 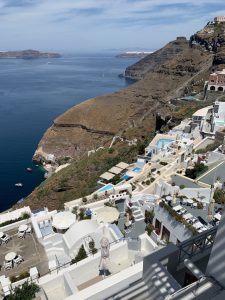 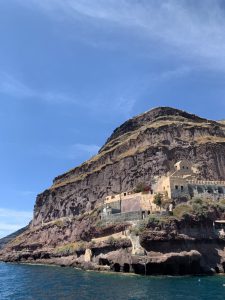 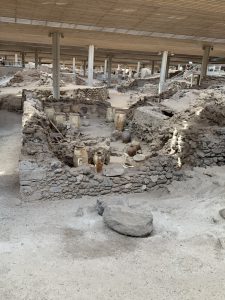