The Sloth and the Basilisk 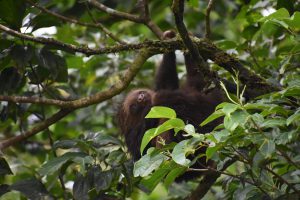 Although it was supposed to be a birding trip in Costa Rica for two weeks, we saw far more than just birds. We saw everything from the terrifying bullet ant to the peculiar peccary. I had no idea what that was, but our guide explained that it was related to the American deer despite the fact that it looked like a wild pig. My favorite animal we saw that was not a bird, however, was the two toed sloth. There are two types of sloths based on the number of toes they have on their front feet—three toed and two toed sloths. Sloths usually have three toes on their back feet. One of my goals for the trip was to see a two-toed sloth. Although it wasn’t related to Avian Biology, I had hoped to see at least one on the side of the street or in a sanctuary. I found this one right outside of the bungalows we were staying in at Heliconias. It was in a tree no more than ten feet away from my bungalow’s door. Before that morning we had gone on a night hike and had the opportunity to see two three-toed sloths. However, because it was dark, I couldn’t get any pictures. The fact that the very next morning we got to see a two-toed sloth was amazing. 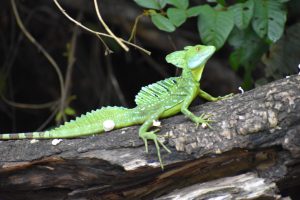 I also loved the emerald basilisk we saw during our hike in the old forest of la selva. The lizard is this gorgeous green color and without my glasses I almost thought it was a leaf. Only about four of us were hiking through the forest because we had been split into smaller groups, and we had almost turned around to head back because it looked like it would rain. However, our guide told us about this bridge a little further in the forest. The view was amazing over the river and the lizard was amazing!