Posted in The Case of the Greek Financial Crisis

We visited the Acropolis after our first day of lectures at the Athens University of Economics and Business.  It was a beautiful evening and a great way to unwind after learning about the Greek financial crisis. Our tour guide, Eleni, gave us a guided tour and we had some free time to explore afterwards.  The Acropolis comes from two Greek words that mean the highest point of the city. Eleni told us that it was built as a piece of propaganda for the leaders at the time. The major structures at the Acropolis include the Parthenon, the gates to the Acropolis and  Erechtheion. The Parthenon was built as a temple to Athena. The Erechtheion was constructed as a temple to Athena and Poseidon. The Erechtheion also includes some beautiful statues called Caryatids. It was fascinating to learn that many of the structures and statues at the Acropolis were in full color but have diminished to their white appearance that we see today.  The Acropolis visit was more than I imagined it would be. It was an extraordinary plethora of structures. It would be amazing to have visited it at its peak in history. 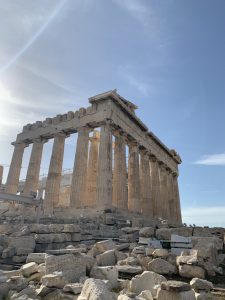 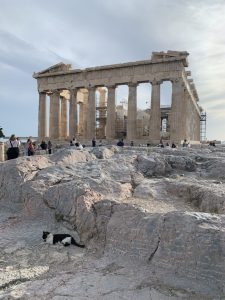