Our day at Solimar 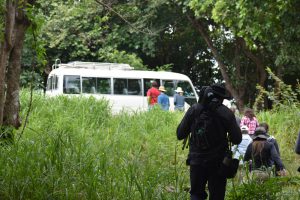 This picture was taken after a long day of exploring Solimar and hiking through the forest to find the spectacled owl nest. Solimar is one of the largest cattle ranches in Costa Rica. I don’t think I’ve ever seen so many cattle in one place. The farm is made up of mostly Brahman cattle and water buffalo. Because it was the end of the dry season and Costa Rica was just entering the rainy season, many of the cattle were extremely skinny. This exaggerated their famous droopy skin and large back humps. We took a bus tour through the farm, stopping occasionally to take pictures of the cattle and birds. We saw several new species that day. Some of the most memorable birds I saw were the jabiru, the roseate spoonbill, the cattle bird, and of course the spectacled owls. The jabiru is the tallest bird and South America, standing at five feet tall, and one of the largest flighted birds in the world. One of my favorite birds that we saw was the Roseate Spoonbill. They have a spoon shaped beak which helps them eat the crustaceans that give them their color–a beautiful pink much like a flamingo. The hardest bird to find that day was the spectacled owl. Someone from Solimar told our guide about a nest they had about twenty minutes into the forest from a spot on the road. We were warned as we pulled over to the side of the road that this would be the worst hike when considering the number of mosquitos. Many people pulled out mosquito nets to put over their heads and sprayed themselves in bug spray. Despite this, the mosquitoes were almost unbearable for twenty minutes. But the minute we stopped to look at the owl nest it was worth it. Two spectacled owls sat on a branch staring at us. We had to be completely silent throughout the hike or risk scaring the owls away. Luckily they didn’t mind our disturbance and we were all able to see the beautiful owls.