The common cultivated tomato (Solanum esculentum L.) is very susceptible to TYLCV. However, breeding for TYLCV was successfully initiated with numerous wild parents, such as Solanum peruvianum, Solanum chilense, and Solanum babrochaites (Lapidot and Friedman 2002).  Numerous commercially available TYLCV-resistant cultivars such as Shanty, Security, Tygress, and Inbar are currently available in the southeastern USA, and a number of breeding accessions also are in the pipeline. The resistance imparted is generally mediated by a single semi-dominant gene (Ty-1) and is directed towards the pathogen. Recently, cultivars with other resistance-conferring genes such as Ty-2 and Ty-3 also have been developed. Most of these cultivars in general exhibit good resistance to TYLCV. These cultivars are not immune to the virus and accumulate TYLCV, but they are known to exhibit mild symptoms or no symptoms at all following TYLCV infection . However, these cultivars do not possess any resistance to whiteflies and support substantial whitefly populations.  In turn, they could also serve as TYLCV inoculum sources as whiteflies can acquire virus from TYLCV-resistant cultivars and inoculate them to other tomato plants. 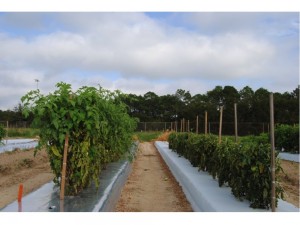 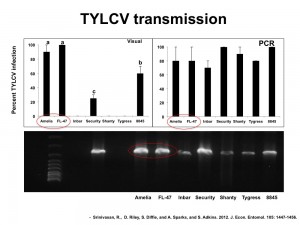 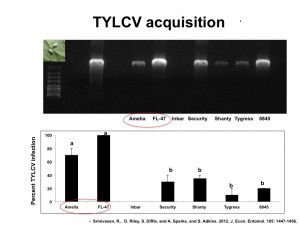 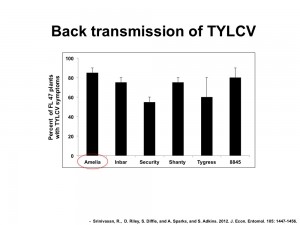 This suggests that insecticides will have to be applied to prevent direct feeding damage by whiteflies and related physiological disorders. Despite the availability of TYLCV-resistant cultivars, growers are very reluctant to plant them due to perceptions such as resistant cultivars have poor horticultural attributes, poor storability, and they are highly susceptible to bacterial and fungal pathogens. Continuous breeding efforts have resulted in TYLCV-resistant cultivars with highly desirable attributes that are comparable to the grower-preferred cultivars.  Currently, less than one-third of the tomato acreage is planted with resistant cultivars in the Southeast likely due to perceived negative marketing characteristics of the resistant lines (Ozores-Hampton et al. 2010).  Also, there are no resistant cultivars available for indeterminate cherry type or grape type tomatoes. Due to the longer presence of indeterminate tomato plants in the fields and lack of TYLCV resistance increases their susceptibility to TYLCV infection and also increases their chances to serve as TYLCV inoculum sources.  New resistant cultivars are released every year, so a website that serves as a single source of information on the performance of new and established TYLCV- resistance cultivars might help growers in the decision-making.

Besides TYLCV, numerous other insect transmitted viruses also affect tomato production in the southeast.  They include Tomato spotted wilt virus (TSWV), Tomato chlorosis virus (ToCV), Cucumber mosaic virus (CMV), Potato virus Y (PVY), Tomato mottle virus  (ToMoV), and Tobacco etch virus (TEV).   Some of the resistant cultivars exhibit resistance to more than one virus, for instance a few cultivars exhibit resistance to both TYLCV and TSWV (Hazera lines). Nevertheless, the stability of resistance in the presence of multiple viruses has not been investigated.  Several of the above-mentioned viruses are known to synergistically interact with other viruses and such synergistic interactions often have resulted in increased symptom expression and increased titer accumulation of component viruses (Vance et al. 1993, Anandalakshmi et al. 1998, Srinivasan and Alvarez 2007).  Such effects can significantly influence susceptibility of tomato plants and cause extensive yield losses. Though available, resistant cultivars do not serve as a silver bullet for TYLCV management and other cultural tactics may be needed to ameliorate the problem.

TYLCV-resistant and susceptible cultivars were evaluated through field trials.   The observations obtained included whitefly adult and immature counts, TYLCV incidence and severity, yields and other post harvest attributes.  The trials typically employed a split-split plot design with mulch as the main plot effect, resistant cultivars and insecticides as the sub plot effects, respectively.  The treatments were at lest replicated four times, and the trials were conducted from 2013 to 2015. 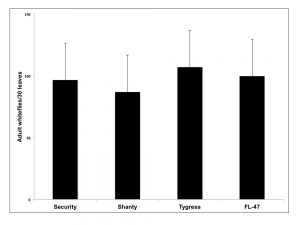 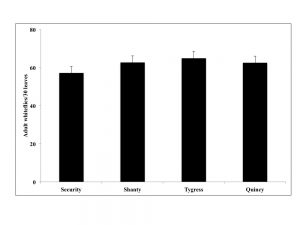 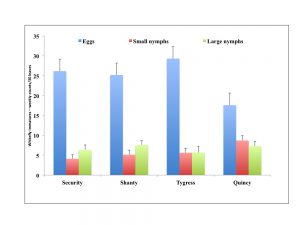 TYLCV-resistant cultivars were not immune to TYLCV.  They did not produce hypersensitive response either.  Instead, infected plants displayed fewer symptoms.  Consequently, the infected resistant cultivars yielded better than TYLCV-susceptible cultivars.  Included below are some graphs that explain the same. 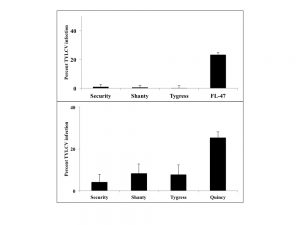 Fig 5.  TYLCV infection percentages in TYLCV-resistant and susceptible cultivars in 2013 and 2014. 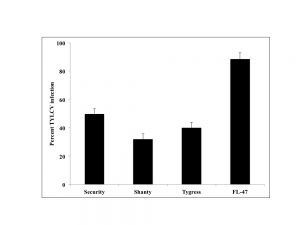 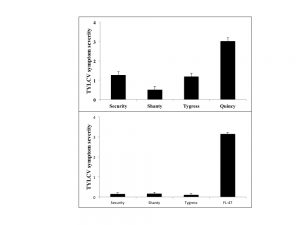 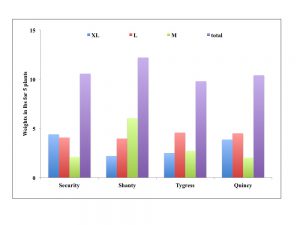 Fig. 8.  Marketable yields in TYLCV susceptible and resistant cultivars in 2014.  Weights are from five plants from each plot. 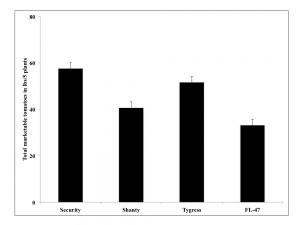 Fig. 9.  Total marketable yields in TYLCV susceptible and resistant cultivars in 2015.  Weights are from five plants from each plot. 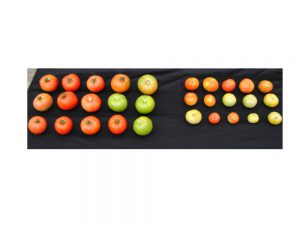 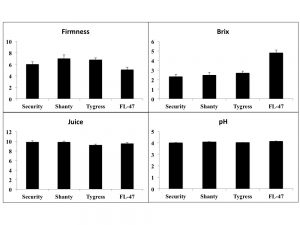 Several cultivars with intermediate resistance to TYLCV are commercially available.  Some names and useful links are listed below.