Insecticide applications are routinely used to manage whitefly populations and reduce TYLCV incidence.  A number of insecticide classes such as neonicotinoids, pymetrozine, ryanodine receptor targets, molt inhibitors, pyrethroids, and plant-derived compounds are used in rotations to manage whitefly populations (Polston et al. 2003, Schuster et al. 2010, Schuster 2011). Neonicotinoids in particular have been extensively used to manage whiteflies and TYLCV in the Southeastern United States.  Typically these insecticides are applied in greenhouses a few days before shipping and at transplanting. Neonicotinoids also are applied foliarly in several instances.  Frequent insecticide applications could lead to undesirable outcomes such as insecticide resistance development and may shorten the usefulness of insecticides.  Whiteflies are known for their notorious ability to detoxify insecticide compounds and develop insecticide resistance rapidly (Horowitz et al. 2005).  According to Schuster et al. (2010) whiteflies are exposed to neonicotinoids than any other insecticide class, and this exposure increases the probability of insecticide resistance development. Studies in Florida and Georgia have already documented resistance to neonicotinoids, such as imidacloprid and thiamethoxam (Polston et al. 2003, Schuster et al. 2010).  Although a number of alternative insecticide chemistries have become available recently, the usefulness of these chemicals in whitefly and TYLCV management is still not proven.

As a part of this grant proposal, seedling drench treatments were evaluated along with TYLCV-resistant cultivars and mulches.  Following greenhouse insecticide drenching, field applications were also undertaken.  The goal was to prevent or minimize early season infections, as early season infections are capable of causing more severe symptoms and increasing yield losses.  While it may be true that insecticides might not be useful in suppressing the incidence of TYLCV infections, our goal was to decrease the whitefly pressure on tomato plants and delay the incidence of infections.  As mentioned before, the insecticides might be ready to act as stand alone options, but it is possible that they could be employed to delay TYLCV infections, reduce symptom severity, and slightly increase yields.    The effects of insecticides on whitefly adult, immatures, TYLCV incidence, TYLCV severity, and yields based on field trials are described below. 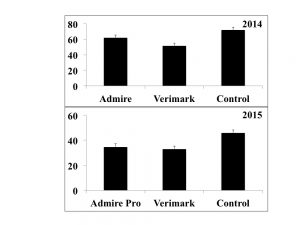 Fig. 1. Average counts of whitefly adults on 30 tomato leaves over the sampling period with two insecticides in 2014 and 2015 fall seasons in Georgia. 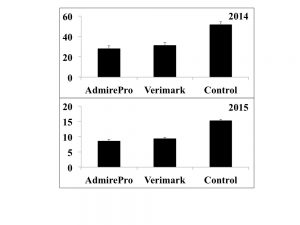 Fig. 2. Immature whitefly counts on tomato plants with and without insecticides.

b. TYLCV incidence and severity 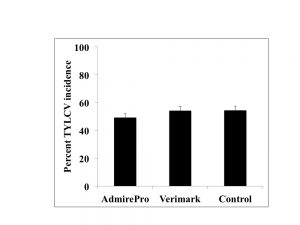 Fig 3.  TYLCV infection percentages in tomato plants with and without insecticides. 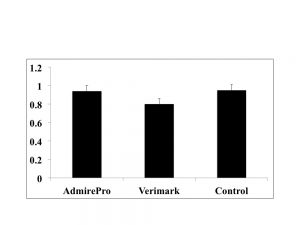 Fig 4.  TYLCV symptom severity on tomato plants with and without insecticides. 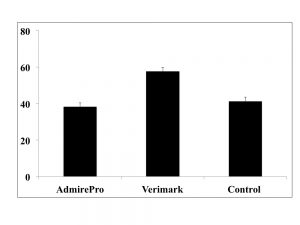 Fig. 5. Total marketable tomato fruits in lbs/5 plants with and without insecticide treatments.

Results indicate that early protection of seedlings with newer insecticides such as Verimark could be providing more additive benefits such as reduced whitefly settling and multiplication, reduced TYLCV incidence and severity, and increased yields.  Though insecticides described here are not stand alone options, their incorporation into the management package seems to provide additive benefits.