Despite the availability of these management tactics, TYLCV incidence is a constant threat to tomato growers in the southeast.  The main reason for the current situation is the lack of a crop- free period.  The utility of a crop-free period for the regional management of TYLCV is best illustrated by the approach taken in the Dominican Republic after severe losses peaked in 1993 (Alvarez and Abud-Atun 1995, Polston et al. 1999).  Prior to implementing a crop free period crop losses to TYLCV were routinely high and growers had greatly reduced the length of theirproduction season since a large portion of the season had become unprofitable due to TYLCV- induced yield losses.  Commercial tomato production in Dominican Republic is now possible only after implementation of crop free period.  A similar approach is warranted in the Southeast.

The other reasons include shipping of virus-infected seedlings, and inadequate adoption of effective management options. Through this proposal we intend to provide growers convincing evidence as to how these factors can significantly impact TYLCV incidence and also provide them with enough TYLCV risk reduction tools.  This effort would promote growers to adopt effective management tactics in an area-wide stature and ensure sustainability of tomato production in the southeast. 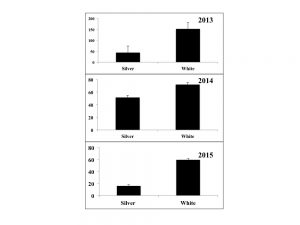 Fig. 1.  Average counts of whitefly adults on 30 tomato leaves over the sampling period under silver and white mulch situations in 2013, 2014, and 2015 fall season in Georgia. 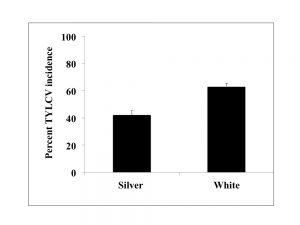 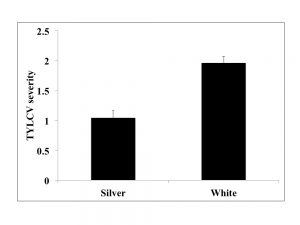 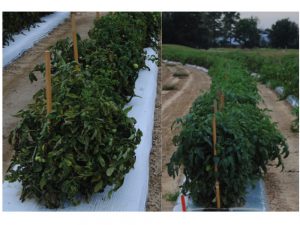 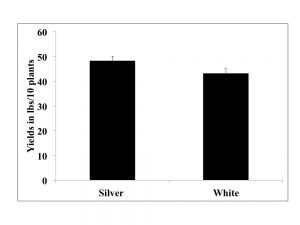 Results reiterate that using silver mulch decreases whiteflies settling on tomato plants as well as their growth, suppresses TYLCV incidence and severity; at the same time, modest yield boosts were also noticed.  These results suggest that in the absence of silver bullets additive benefits based on management choices made could become very useful.

b. Seedlings as inoculum sources

Seedling trays from several growers were brought in to the greenhouse, sprayed with an insecticide, and TYLCV symptoms were monitored for 3 weeks.  Symptomatic plants were extremely rare under these situations.  Random PCR testing also did not indicate substantial TYLCV infections in these trays.

c. Inoculum sources in the vicinity

Results indicated that besides other known solanaceous crop hosts, weeds in tomato production systems were identified as alternate hosts.  The role of such hosts as incoulum sources and their impact on TYLCV epidemics is being investigated.