The key components of the pathosystem include tomato, whiteflies, TYLCV, and alternate hosts.

Tomato is an important commercial crop in the Southeastern United States.  Tomato is grown in > 44,000 acres in the Southeast and is valued at > $850 million (NASS 20013).  Tomato is one of the top ten vegetables that are being produced in the States of Georgia, Florida, and South Carolina.  Florida alone produces approximately 33% of United States tomatoes. In 2013, in

Florida, ~30,000 acres of tomato were harvested with a production value of $622 million, and ~2300 acres of tomato were harvested in Georgia with a farm gate value of $50 million (https://www.ipmcenters.org/cropprofiles/docs/FLtomatoes.pdf, https://www.caes.uga.edu/center/caed/pubs/documents/CAEDFarmGateValueReportfor2012C.pdf, NASS 2013). Despite its economic importance, the acreage of tomato has been steadily declining in recent years. For instance, in Georgia, tomato production acreage dropped by 35% in the last few years (6100 acres in 2006 to 2300 acres in 2012) (Georgia Farm Gate Report, 2012).  One of the main reasons attributed to this decline are insect-transmitted viruses such as TYLCV.

Biotype B of the sweet potato whitefly (Bemisia tabaci Genn.), Hemiptera: Aleyrodidae) besides causing direct feeding related physiological disorders such as irregular ripening of tomato fruits (Schuster et al. 1996, Schuster 2001), it is also the vector of TYLCV (family Geminiviridae, genus Begomovirus) (Fig. 3).  The introduction of whiteflies from the Old World into the new world has increased the incidence of whitefly-transmitted viruses including TYLCV (Czosnek and Latterot 1997, Czosnek et al. 2001).  TYLCV was first identified in Israel in the late 1950s and since then has been documented throughout the World (Czosnek 2008).  It was introduced to Florida in the United States (Polston et al. 1994, 1999) possibly from the Caribbean islands (Alvarez and Abud-Antún 1995).  It then very quickly spread into Georgia and the Carolinas (Momol et al.1999, Polston 2002, Ling et al. 2006).  In Georgia TYLCV was first reported in Grady, Tift, and Colquitt counties (Momol et al. 1999, Pappu et al. 2001).  More recently it was detected in Texas (Isakeit et al. 2007) and California (Rojas et al. 2007). The incidence of TYLCV has been steadily increasing ever since, it caused up to 11-15 % yield loss in some fields in 2007 and 2008.  Also, from 2009 to 2014, yield losses attributed to TYLCV increased substantially in several tomato fields in tomato producing counties in Georgia with up to 100% yield loss.  This has led to an increase in use of insecticides to reduce the whitefly vector populations. 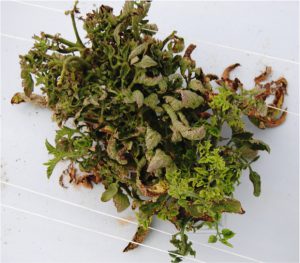 TYLCV is present in the phloem of infected tomato plants and is transmitted by whiteflies in a persistent circulative manner (Czosnek et al. 2001).  The incidence of TYLCV is directly correlated to whitefly population densities (Czosnek 2008).  Nevertheless, even a single whitefly also can transmit the virus to tomato plants.  The acquisition access period is 15 to 30 min, the latent period is 8 to 24 h, and the efficient inoculation access period is at least 15 min.  The ability of whiteflies to transmit TYLCV decreases with age.  Unusually, some isolates of this virus also are transmitted among whiteflies through mating or through eggs (Ghanim and Czosnek 2000). Symptoms in infected tomato plants typically develop 2 to 3 weeks post inoculation. Infections soon after transplantation can lead to severe stunting and lack of fruit formation.  Infections at later stages can lead to suppression of vegetative growth and fruit set.

The incidence of TYLCV seems to vary seasonally based on whitefly population dynamics.  InSouth Florida TYLCV incidence is highest in the spring production season, in central Florida both spring and fall seasons can be affected, and in north Florida the virus is most problematic in the fall season.  In Georgia and South Carolina, TYLCV incidence is highest in the fall season, these differences are presumably due to the milder winter in south Florida and the colder winters in Georgia and South Carolina, which knock down whitefly populations.

Though there are numerous alternate hosts for whiteflies, TYLCV seems to have a relatively small host range (Polston et al. 2009).  TYLCV is known to infect other hosts such as pepper and, tobacco, but the infections are symptomless. Extensive research conducted in Florida and Georgia did not lead to identification of other weed hosts as significant reservoirs of TYLCV. More than 2000 samples of wild plants collected in Florida from areas around fields with high incidences of TYLCV, but none tested positive for TYLCV (Polston et al 2009). It is widely acknowledged that the commercially produced tomato plant itself is the most important inoculum source (Brown and Simone 1994, Polston et al. 1999, Polston et al. 2009).  Additionally, volunteer tomato plants and cherry type indeterminate tomato plants have a greater potential to serve as inoculum sources of TYLCV other than determinant globe type tomato typical of large acreage commercial production.