This website is funded through a USDA-AFRI Food Security program funded grant proposal #.  The title of the grant is: Enhanced implementation of integrated management tactics for Tomato yellow leaf curl virus in the Southeastern USA.

Whitefly transmitted Tomato yellow leaf curl virus (TYLCV) is arguably the most important pathogen affecting tomato production in the southeast.  TYLCV was first introduced to Florida in the 1990s from the Caribbean region, and has been causing severe yield losses.  Fresh market tomato in the southeast is valued at $675 million annually.  TYLCV-induced losses had been reported to reach as high as 95% in the Dominican Republic, but due to aggressive insecticide intervention by US growers against whiteflies, losses have been maintained below 10 %.  TYLCV affects yields by reducing fruit set and by increasing the costs of production due to increased insecticide applications and other management tactics. Fortunately, over the last decade, significant research progress has been made towards TYLCV management.  Examples include more efficacious insecticides, appropriate cultural techniques, improved TYLCV resistant cultivars, and a greater understanding of the TYLCV epidemiology.  However, TYLCV continues to cause losses annually.  This is due, in part, to a lack of persuasive regional IPM data and lack of grower acceptance of components of an integrated TYLCV management program.  One of the main contributors to localized TYLCV epidemics is believed to be continuous tomato production.  Through this proposal, we intend to demonstrate the importance of a phenological gap in tomato production, usefulness of new resistant cultivars and other management tactics.   Also, we intend to identify other TYLCV inoculum sources and assess their importance.  With novel and already available integrated management tactics we intend to implement a risk management strategy for growers in the Southeast.

Even before the introduction of TYLCV, tomato production in the Southeastern United States has been under threat from insect-transmitted virus diseases such as TSWV and CMV.  The emergence of TYLCV and other whitefly-transmitted viruses (ToCV) has further aggravated the scene.  For instance, Georgia’s tomato acreage has declined by 35% (6100 acres to 3985 acres) from 2006 to 2008.  Insect-transmitted viruses are the main reason for the reduction in acreage. As further evidence, Southern Region Information Exchange Group has identified insect- transmitted viral diseases as a priority for IPM (SERA003-IPM), which comprises all IPM coordinators and several IPM researchers in the Southern Region.  In April 2007 SERA003-IPM developed a list of 6 research priorities for IPM, and vector/virus management of crops was listed as the second most important priority.  The need for TYLCV research is further evidenced by citations in Pest Management Strategic plans (PMSPs) for tomato (https://www.ipmcenters.org/pmsp/pdf/GA-SC-TomatoPMSP.pdf) and in crop profiles (https://www.ipmcenters.org/cropprofiles/docs/FLtomatoes.pdf) in Southeastern U.S. TYLCV is responsible for wiping out tomato cultivation in Dominican Republic and the Caribbean Islands in the early 1990s (Alvarez and Abud-Atún 1995); it was worth over hundreds of millions of dollars.  TYLCV was first introduced to Florida in 1990s and was first identified in Dade County by Polston et al. (1994, 1999); it was likely introduced by viruliferous whiteflies in shipments.  The virus has since then spread throughout the state and elsewhere in the southeast. TYLCV was first detected in Georgia in 1999, in Tift, Grady, and Colquitt counties. TYLCV- infection results in severe stunting of plants, abortion of flowers, and considerable reduction in yield (up to 100% in selected fields).  The dollar value of damage caused by this virus has not been precisely estimated and is believed to be in tens of millions of dollars in Florida alone.  No estimates have been calculated for TYLCV-induced losses in Georgia (Momol et al. 1999, Pappu et al. 2001).  The incidence of TYLCV in Florida is consistent year after year, whereas in Georgia the incidence and severity has been sporadic.  From 2006-2008, TYLCV incidence extended only up to 15% whereas in 2009 several fields were severely infected with TYLCV (up to 70%), and some susceptible cultivars in our 2010 and 2011 fall experimental trials were infected up to 100%.  Tomato production in Georgia has already been hit hard by TSWV; emergence of TYLCV has aggravated the situation. Numerous stakeholder groups have identified TYLCV as a major impediment to tomato production.  Tomato growers who attended the Southeast Fruit and Vegetable Growers Annual Conference (SEFVGAC) at Savannah, January 2009-2012, have consistently identified TYLCV as a serious problem.  This group also identified TYLCV as a research priority. The Georgia Commodity Commission for Vegetables (GACCV) also funded seed grants to Drs. Srinivasan and Riley.  Similarly, the grower associations in Florida also have been funding numerous research projects to identify TYLCV management tactics to CO-PIs of this proposal. 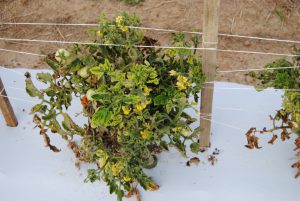 Yellowing and curling of leaves, and reduction of leaf size in a severely infected tomato plant

The advent of TYLCV has significantly increased production costs for tomato growers.  As of 2004, approximately $6000 to $7000 was estimated to be involved in producing one acre of tomato.  Twenty five percent of the expenses were required for pest management, the bulk of which was spent towards managing insects that serve as vectors of viral diseases (https://www.ipmcenters.org/cropprofiles/docs/FLtomatoes.pdf).  The cost of production has gone up since then and so has the cost of insecticides. 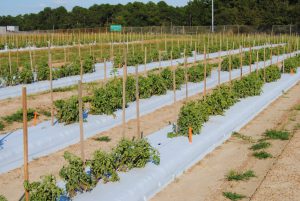 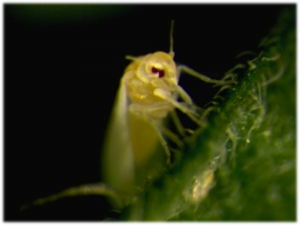 Reflective mulch is expensive and is often not used by growers.  Typically, in spring black plastic mulch is used to maintain optimum soil temperature and reflective mulches do not help warm the soil.  Standard plastics used, white or black do not have any whitefly deterrent abilities. Many growers may not be convinced of the usefulness of reflective mulches so are reluctant to adopt them.  In addition, reflective mulches are non-biodegradable and their disposal presents a major problem for growers.  This situation might be improved with better and more convincing communications efforts with growers.

A number of reasons can be attributed to the reoccurrence of TYLCV year after year.  The most important reason in areas (South and Central Florida) where the winter is not so severe is the survival of inoculum sources.  Also, the planting of ‘U-pick’ tomatoes in the time gap between two major tomato-producing seasons ensures that the inoculum persists in the ecosystem. Despite conducting extensive research in search of alternate hosts, tomato itself is the most important inoculum source for TYLCV.   This reiterates that a phonological break between the tomato production periods is crucial for suppressing TYLCV epidemics. Second, TYLCV also is transmitted by whiteflies in the greenhouse.  More than 95% of tomato seedlings that are used for transplanting are produced in greenhouses.  These greenhouses often are not far from the production areas and as a result whiteflies move from the production fields and transmit TYLCV to new seedlings in production in greenhouses. Often these houses are not screened or enclosed to allow sufficient ventilation and temperature control.  It is very difficult to identify TYLCV infection at the seedling stage, as they typically do not produce visible symptoms.  However, upon planting these infected seedlings display prominent TYLCV symptoms in a short time interval.  Currently, spread of TYLCV through seedlings has not been extensively studied and no stringent testing to ensure the quality of tomato seedlings is available. Third, growers typically do not employ integrated management tactics even when possible. There are no area-wide strategies that are being employed currently.  Growers rely most heavily on insecticides for TYLCV management.  Unfortunately, not many insecticides can suppress whiteflies and TYLCV incidence.  Until now, the best class of insecticides for virus management was the neonicotinoids, but whiteflies have already started developing resistance to them and growers are already seeking alternatives. While TYLCV-tolerant tomato cultivars are available, they are not planted extensively.  The cultivars often lack essential horticultural characteristics needed in the Southeast US (resistant to bacterial spot, resistance to Phytophthora) and they lack some of the fruit qualities growers need for shipping.  Even in severe TYLCV incidence areas, growers are reluctant to plant resistant cultivars.  Hence the reason, less than one-third of the tomato production acreage are planted with resistant cultivars.   This lack of adoption of effective management tactics has lead to increased incidence of TYLCV in the southeast.  Tens of millions of dollars in Yield losses occur every year in tomato production due to whiteflies and TYLCV.