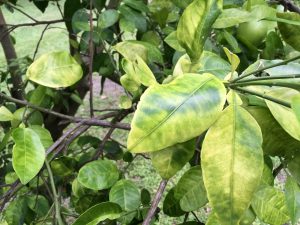 Citrus greening disease, also called Huanglongbing (HLB), is the most devastating disease of citrus worldwide (Figure 1). It is caused by the phloem-limited bacterium Candidatus Liberibacter asiaticus (CLas), which is spread from tree-to-tree by Diaphorina citri, the Asian citrus psyllid (ACP). The CLas bacterium inhabits the phloem of the plant, and disrupts the normal transport of sugars produced by photosynthesis in the leaves to the other plant parts that need them (flowers, fruits, roots, seeds). This disruption ultimately leads to plant weakness and death. All commercial varieties of citrus are susceptible to this disease. Since its first confirmation in 2005, citrus greening disease in Florida has resulted in over a 70% decline in citrus production. 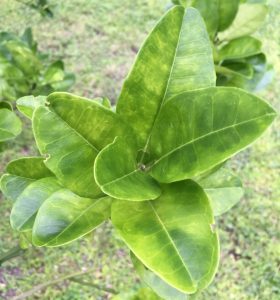 The symptoms of citrus greening are often not apparent for the first year or two after infection with the bacterium.  This can lead to the disease going unnoticed until it has already spread to other nearby citrus trees. Once the disease has progressed, the best diagnostic symptom of citrus greening is “blotchy mottle” (Figure 2).  Blotchy mottle is a random pattern of chlorosis (yellowing) on leaves.  Unlike nutrient deficiencies and other issues that may cause chlorosis (and appear superficially similar), the blotchy mottle of citrus greening disease is asymmetrical (meaning that is not the same on the right and left sides of the leaf). As the disease worsens, affected trees will progressively decline and the fruit produced can become misshapen, discolored, and bitter. 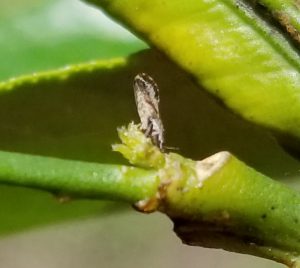 This blog is an initiative of the UGA Citrus Team in order to provide Georgia citrus growers with the most updated information on all aspects of citrus production.