As blueberry development is currently in full swing, it is a good time to review some aspects of the mummy berry situation from spring 2014. Where fungicide applications were minimal or absent in 2013 and 2014, mummy berry was back with a vengeance (Fig. 1); this included some organic sites. However, most producers seem to have learned a lesson from 2010, so spray programs were generally initiated much earlier in 2014; also, as much as possible, spray programs were “tight,” although rainfall did cause issues with many timed fungicide applications. Damage in fields with well-timed fungicide applications has been minimal.

Although there is generally a good correlation between shoot blight levels (primary infection) and fruit mummification (secondary infection), it is too early to tell whether fruit mummification in rabbiteyes will be observed this year. The initial apothecium germination warning was issued on 4 March, and the first mummy berry strikes were observed on 17 March. We hope that judicious fungicide applications made after strikes were observed will have been effective in preventing infection of open flowers and subsequent fruit mummification. So far, mummy berry has not been reported either as strikes or mummified fruit in southern highbush varieties in Georgia.

If one examines the temperatures and rainfall patterns that occurred as leaf and bloom tissue emerged, we did have numerous frost/freeze events in our major blueberry production region. If we can extrapolate the temperature information from Dr. Annemiek Schilder’s Michigan fact sheet on mummy berry (Schilder et al., 2008) to rabbiteyes, we do start to see a match again this year:

“Ascospore germination requires free water, and the optimum temperature for infection of susceptible tissue is 57°F. Developing vegetative buds become susceptible to infection when about 1/6th inch of green tissue is exposed. Flower buds become susceptible when the bud scales begin to separate. At 57°C with adequate moisture, germination and infection can occur within 4 hours; at 36°F, at least 10 hours of leaf wetness are required for infection. Blight symptoms appear about two weeks after infection. In lowbush blueberries, developing leaf and flower bud tissues are more susceptible to infection after exposure to freezing temperatures, and this susceptibility can last for up to 4 days after the frost event. This also appears to be the case in highbush blueberries.”

We had developing leaf and flower bud tissues exposed to freezing temperatures on numerous occasions in February/March, possibly making the tissue more susceptible to infection for 4 days. Immediately after these freezing events, the 57°F optimum infection temperature was often achieved from middle to south Georgia. Cold temperature differentials in fields and/or locations might help to explain the differing degrees of infection (i.e., colder lower portions of fields or lower fields). Since rains were observed throughout the state on multiple occasions, we likely had ascospore release and germination under optimum conditions of moisture and temperature for infection – as well as having very susceptible (due to freeze damage) bloom and leaf tissue. After infection occurred, we would have had 2 weeks before symptom expression. As mentioned, the first report of mummy berry strikes was made on 17 March, so this fits fairly well.

It is somewhat difficult to determine a perfect trigger for the first fungicide application, since flowers and leaves do not open simultaneously. In a “normal” year, early bloom (5 to 10% stage 6) usually occurs before green tip on most rabbiteye cultivars in south Georgia, Brightwell being one exception. If flowering initiates the first fungicide spray, we would generally recommend that the first application be made when 5 to 10% of the flowers are open (stage 6), although earlier applications at stage 4 or 5 (flowers exposed but corollas not yet open) would be warranted if freeze damage has occurred or is expected to occur. As stated above, freeze damage can increase the susceptibility of closed flower buds to ascospore infection, and this may have been an important contributing factor to widespread flower strike development this year (Fig. 1).

If the leaves (green tip) trigger the initial application, as would have been the case this spring on most rabbiteye cultivars, then producers really have to make sure they are applying before emerging leaves are 1/6th inch in length. Leaves do not require cold damage for infection to occur, and any exposed green tissue can be infected. Once the initial fungicide is applied, the rest of the bloom should be covered with fungicide applications, and this usually results in 2 to 3 more applications, depending on how quickly the bloom progresses. In 2014, up to six application were required in some locations due to the “stop and go” nature of the bloom as a result of alternating warm and cold weather, and the fact that cultivars with varying bloom times may have been present in a field.

In practice, fungicide applications at 7-day intervals have worked well over the years. For resistance management, we recommend that the first application be Pristine (unless Exobasidium leaf and fruit spot has been confirmed for the location), followed by application of DMI fungicides (Indar, Orbit, Tilt, Bumper, Quash, etc.) + Captan (CaptEvate if Botrytis conditions are prevalent, i.e., wet and/or cold damaged tissues are available for infection) for the next two applications. Additional applications, if needed based on bloom progression, should alternate active fungicide classes as much as possible.

But what can you do now to maintain the 2014 crop and prevent major problems next year? Obviously, it is too late to try to control the disease chemically, given that no new infections can occur past the end of bloom and the pathogen is already firmly established in the developing fruit. The focus for the 2014 crop needs to be on minimizing the number of mummies that end up in the packinghouse and especially in the final product. This requires careful adjustment of the mechanical harvester to separate as many mummies as possible from sound fruit in the field, e.g., through aggressive operation of the blower fans. If possible, the mummies should be collected separately (rather than blown back into the field) and disposed of at a remote site with no blueberry fields nearby. Vigilant adjustment of sorting and separation equipment is also critical in the packinghouse, where the packingline may have to be run slower and/or more inspectors may have to be hired to ensure complete removal of mummies.

Most mummies fall on the ground before or during harvest, where they will substantially increase the soil inoculum levels for 2015. Several sanitation treatments have been suggested to destroy the mummies on the ground or reduce their viability, but none of these methods alone is sufficiently effective. Certain herbicides such as diuron and simazine, when applied at the time of mummy germination in late winter/ early spring, can inhibit mummy germination, apothecium formation, and/or ascospore production (Cox & Scherm 2001). However, to what degree these effects translate into reductions in the level of primary infection in the field is currently unknown. Burying mummies to a depth of ~2 inches, for example by applying soil cultivation, has long been suggested to reduce or prevent mummy germination. However, most mummies are located near or within the crowns of the blueberry bushes, where they are difficult to access with tillage implements (Ngugi et al. 2002); tillage can also damage roots, so it is not the best method to utilize under the plants. Raking the mummies to the row centers and tillage of the row centers only would work, but this is an expensive operation.

Covering the beds with mulch to a depth of 2 inches may be an effective, albeit expensive, option to suppress mummy germination. However, as the mulch degrades over time, the long-lived mummies may find favorable conditions for germination, especially considering the high moisture-holding capacity of the mulch. As a warning, covering beds with soil will result in significant issues with root/oxygen relationships, and significant plant stress or even death can occur.

In summary, soil sanitation treatments alone are unlikely to provide sufficient suppression of mummy berry for the 2015 season, and, if environmental conditions are suitable for the disease again, aggressive use of fungicides will be needed to manage both primary and secondary infection next spring. As stated above, the recommendation still holds that fungicide applications should start at leaf bud break or very early bloom (whichever occurs first) and continue throughout the end of bloom (i.e., until no more flowers at stage 6 or earlier are present). Applications should alternate QoIs and DMIs, and spray intervals should be around 7 days, depending on the rate of bloom progression. It is hoped that a combination of sanitation and judicious fungicide use will prevent a situation similar to that of 2010, despite the substantially increased inoculum levels going into next year.

Cox, K. D., and Scherm, H. 2001. Effect of desiccants and herbicides on germination of
pseudosclerotia and development of apothecia of Monilinia vaccinii-corymbosi. Plant Disease 85:436-441.

*This article was modified and updated from a previous article published in the 2013 Dixie Blueberry News. 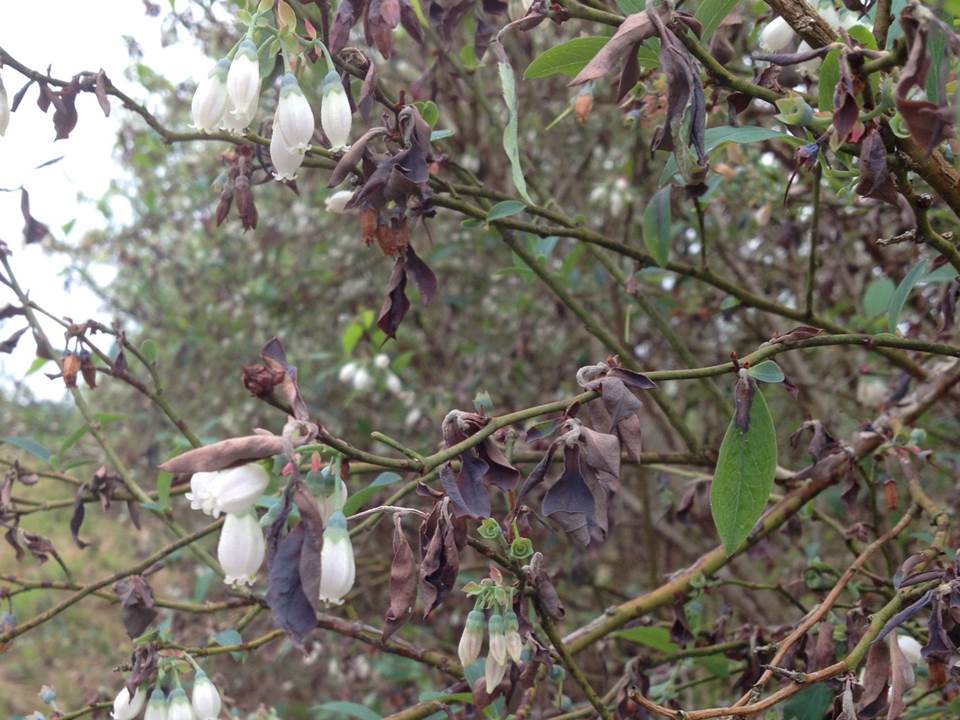