Management of Ground Pearls in Blueberries

A grower recently complained about his blueberry bushes being less vigorous with weak root system. After examining the root system, we discovered that the roots were infested with numerous small, yellowish-brown round cysts which were identified as ground pearls. Ground pearls, Margarodes spp. (Hemiptera: Margarodidae), are subterrestrial insects closely related to aboveground armored scale (Hemiptera: Diaspididae). They are sometimes referred to as earth pearls or pearl scale. As their name implies, ground pearls are small, round insects which are pink to yellowish-brown in color, and look similar to the pellets of slow release fertilizer found in container grown plants. Unlike their scale relatives, ground pearls retain their well-developed fossorial legs and excrete a waxy covering that surrounds their entire body except their piercing-sucking mouthparts. Ground pearls are identified by the presence of small pearl-like bodies on the roots or in the soil (Fig. 1 A and B) which range from 1/6th of an inch to as small as a grain of sand. 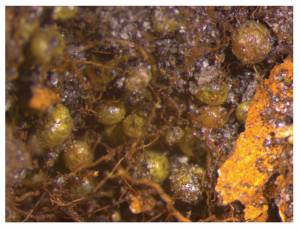 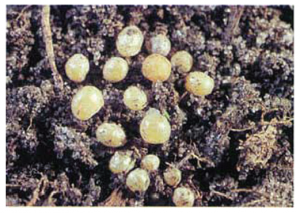 Ground pearls typically complete one generation per year and overwinter in the cyst or pearl stage. During the late spring or early summer adult females, usually pink in color (Fig. 2), emerge from their cysts, migrate, and then lay up to 100 eggs into an ovisac made up of wax-like filament. Under favorable conditions, a female may deposit several ovisacs in a single year without mating. The eggs hatch several days after being laid. The first instars (crawlers) leave ovisac to seek out a healthy root to attach themselves to and feed on plant sap using use their needle-like exposed mouthparts. Once established, the nymphs begin to secrete their waxy covering and develop into ground pearls. The nymphs continue to develop through summer into the fall and overwinter as adults inside the cysts. 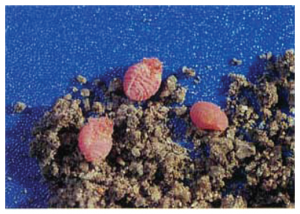 Ground pearls are predominantly the pests of grasses; however, they have been reported to cause economic damage in sugarcane, grapes, blackberries, raspberries, blueberries, and several other annual and perennial plant species. The extent of damage depends on the population density of ground pearls and over 150,000 cysts per bush have been reported in blueberries. At high densities, blueberry bushes appear less vigorous and other symptoms may include chlorotic leaves with gradual wasting, reduced production, and mortality of young plants, all of which combine to make the crop non-viable in heavily infested areas over time. Because of their small size and subterrestrial habitat, ground pearls move only 4 to 6 inches per year by natural means. The long distance dispersal of ground pearls is attributed to anthropogenic causes including movement of infested organic materials on farming implements and the sale of infested plants at nursery. Certain ant species such as the Argentine ants have also been reported to transport ground pearl crawlers to new areas.

Ground pearls have been reported as pests from Australia, Africa, the Caribbean region, North America, South America, and Southwest Asia. Within the United States, ground pearls are potentially serious problems in both southeastern and southwestern states. If you suspect ground pearl infestation in your orchard, dig into the soil 3 to 4 inches deep and carefully inspect the roots and soil around the root zone to find pearl like insects.

It is extremely important to take precautionary measures to protect blueberries from ground pearl infestations because it is very difficult and takes long time to control ground pearls in perennial cropping systems such as blueberries. When establishing a new blueberry plantation, carefully examine the roots of nursery plants to avoid planting blueberries already infested with ground pearls. Once ground pearls have been detected in an orchard, the blueberry growers may take following measures to manage infestation: