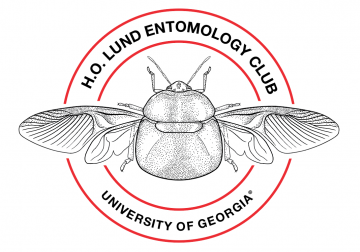 The Schmidt seminar is sponsored by the Schmidt Family at the UGA Department of Entomology. Annually, graduate students nominate, vote, and invite a speaker to the department on the Monday of the 3rd week of September. Speakers are alumni active in non-academic careers.

The U.E. Brady Memorial Seminar is sponsored by the U.E. Brady Fund at the UGA Department of Entomology in memory of Dr. U. Eugene Brady. Dr. Brady received both his B Sc and MS degrees from Auburn University, and his PhD from the University of Illinois in 1965. He served as an entomologist with the US Department of Agriculture in Gainesville, FL, before moving to the University of Georgia’s Department of Entomology, where he served for 23 years. Dr. Brady taught undergraduate urban/medical entomology and insect physiology. He also served as graduate coordinator for the department. Dr. Brady’s ever-present smile, friendly hellos, and genuine concern for others endeared him to the students of the department. It is therefore appropriate that this annual lecture, as a memorial to Dr. Brady, is organized by the graduate students of the department and remains an enduring symbol of their admiration. Graduate students nominate, vote, and invite a distinguished scientist in the field of Entomology. The seminar is held annually on Monday of the 2nd week of October.

The H.O. Lund Seminar is sponsored by the H.O. Lund Fund at the Department of Entomology in memory of Dr. Horace Olan Lund. He received his PhD from the University of Minnesota. He served as an officer in the Navy as part of one of the Malaria and Epidemic Disease Control Units during WWII.Dr. Lund was the founder of the Department of Entomology at UGA and served as department head from 1954-1974. He was also instrumental in creating the Georgia Entomological Society. As a result, he is often referred to as “Mr. Entomology of Georgia” and “The father of Entomology in Georgia.” His role as a scholar and an advocate of the study of entomology is still remembered by faculty and students through a week-long celebration of insects known as “Lund Week”. This celebration culminates in a banquet where various students awards, including some graciously sponsored by the Lund Family, are given. The H.O. Lund Seminar speaker is nominated, voted on, and invited by graduate students of the department and the seminar given during the “Lund Week” banquet, Friday of the 3rd week of April.