The precursor of the UGA black fly colony was developed by Dr. Ed Cupp and his associates at Cornell University in 1981. Eggs of Simulium vittatum cytospecies IS-7 were collected from a small stream near Cambridge, NY. This material was used to initiate the early generations of the colony using the Cornell Automated System. In 1991, Dr. Noblet, at the time working at Clemson University, visited the Cupp lab and returned with drawings and protocols of the colony operation. In March of 1991 eggs were received and the Clemson strain of the colony was initiated. Dr. Noblet came to the University of Georgia in 1999 bringing the black fly colony with him.

The colony is based around aquatic rearing units that were converted salt water aquariums. The units have:

The units have been modified to incorporate a “runway” that serves as an artificial stream and provides the surface where the black fly larvae attach, develop and pupate. The runway is constructed of wood and coated with multiple layers of polyurethane. Strips of nylon screening are attached to the runway surface to provide a substrate for the larvae to attach and to provide a substrate for collecting larvae for use in experiments. 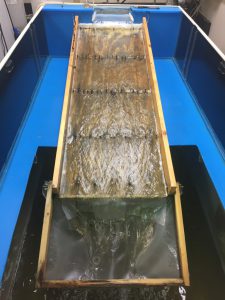 Black fly larvae typically mature through 7 larval stages, or instars, before enclosing in a pupal cocoon. At emergence, the fly will emerge from the pupal cocoon and rise to the surface of the water in a bubble of air. After hardening their wings the flies begin their search for sugars and nectar for flight energy and the females begin the search for their preferred host to obtain a blood meal and the proteins needed for egg development. Simulium vittatum cytospecies IS-7 is autogenous, meaning they can produce their first batch of eggs without a blood meal. This trait is a huge advantage in the laboratory environment, allowing us to operate the colony without needing to blood feed the flies and comply with the animal use protocols required in this process.

Every day of the year, in addition to feeding the colony, the emerging flies are collected by exchanging the adult tubes that are connected to the glass funnel at the apex of the emergence hood. The glass funnel is the only site where light enters the emergence hood. This design takes advantage of the black fly’s strong phototactic behavior (attracted to light). The flies move towards the funnel and crawl into the tube where they accumulate. The accumulation of flies simulates a mating swarm. After being confined in the mating tube for 45 minutes, the flies are released in the adult container (a quart cardboard container with screening over one end). The flies are stored through the following week in refrigeration at 5°C. Each holding container has cotton pads soaked with 10% sucrose and distilled water placed on the screening end of the container.

On Monday of each week the adult containers are removed from refrigeration and the flies are allowed to warm and resume egg development. On Tuesday the flies are released in the oviposition chamber and the cycle is continued. In the colony system oviposition is conducted in insect cages and aquarium system with water dripping on cloths that are back lit. The light and moisture attract the ovipositing flies to the cloth substrate. These substrates are attached to the surface of the runway to initiate a rearing.