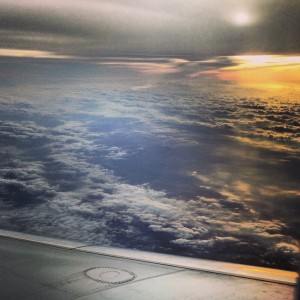 My lovely view for ~24 hours

Hello! My name is Molly P. and I chose to spend a semester abroad in Sydney, Australia. Sydney was actually not the first place that I wanted to study abroad. I am very interested in exotic animal medicine and really wanted to spend a semester in the heart Africa reenacting my own version of The Lion King. Obviously, there are not many universities that fit that requirement. After taking Animal Reproduction at UGA I also thought marsupials were very interesting, and what better place to see marsupials than in Australia! After I was accepted to the University of Sydney I had my mind completely set on travelling down under and becoming best friends with a kangaroo.
I am originally from North Carolina, and I think being 7 hours away from my family for the past three years helped with my anxiety about travelling 15 time zones away (Its almost the same thing, right?). The most nerve wrecking part of the pre-departure experience was attempting to get classes to transfer correctly/having the University of Sydney accept me into certain veterinary classes not usually offered for exchange students as well as finding a place to live. I applied for on-campus housing but did not hear back from them until a week and a half before leaving. After weeks of sending annoying emails (Sorry, USyd Housing Department), I finally did hear from them and am living on the road across from campus. I breathed a sigh of relief…until I realized that I could not go get my key on the Saturday I arrived and was homeless for two days until the office opened back up on Monday. Even with this little inconvenience, having to find a hotel/hostel to stay in for two nights was fine since I knew that I actually indeed had an address to call my own ultimately.
I was (entirely over) packed and ready to leave when I woke up the day my flight was scheduled to leave with an email from Qantas Airlines. I anxiously opened it to find out that my flight from Los Angeles to Sydney had been cancelled. Awesome. After I, admittedly in a slight panic, called my mother she called the airlines and got my flight worked out so I was just arrived about 10 hours later than I was originally supposed to. So, even though I woke up on the February 21st thinking I was flying from Raleigh → DC → LA → Sydney and I actually ended up going from Raleigh → Dallas → LA → Melbourne → Sydney, I was packed and ready for my two-day voyage of airports, airports, and…more airports. The only question I had when I finally arrived in Sydney on the 23rd of February with my hotel’s address in hand: What did I miss on February 22nd?